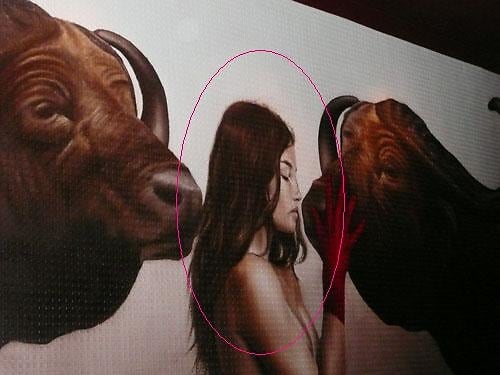 Update: The model in this picture is Tamiris Freitas who has never dated Ronnie Madra's.  Anyway, we like the picture and apologize for the mix-up!

There are a couple rules in life to live by which include, among other things, never getting a tattoo of a significant other on your body. And now there's another one to add to the list - never make your significant other a fixture of your nightclub's design. For those of you who have entered past the threshold of 1oak, you've probably at some point or another gazed at the picture on the wall with a woman and two bulls. Artistic, a bit bizarre, and of course makes you wonder "who is that?" Well she is none other than the partner and fiance of 1oak partner Ronnie Madra, Alhia. Or was.

Its splitsville for 1oak impresario Ronnie Madra and his hoola-hoop twirling fiancee.

Remember, it was not too long ago when Ronnie was professing his desire to settle down now that he matured and opened up 1oak:

"We're looking to the future," Mr. Madra said. "We want to have families and settle down." This is true, at least, of Mr. Madra, who became engaged last spring. [NY Times]

Was 1oak's success and throngs of models to blame? Who knows, but the painting isn't going anywhere.