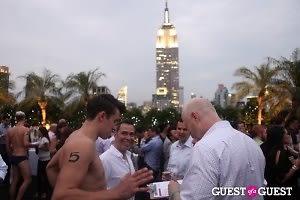 Gothamist reports that rooftop hotspot 230 Fifth is in the middle of a racial discrimination lawsuit in which a Texas man is seeking $500 million in damages because, allegedly, his 16-strong party was kicked out of the bar for being black. But this isn't the first time something like this has happened! Apparently quite a few people have been up in arms over what they see as rampant racism in New York clubs.

In January it was reported that East Village bar Continental was under investigation from the City Commission on Human Rights for supposedly denying black people from admittance, just one month after protests by a group called the Answer Commission.

A man named Kenneth Carew, who is black, told East Village Local that in 2008, a bouncer at Continental—who was also black—told him that "Your people don’t know how to act when they’re not in their own environment." The "your people" comment makes it seem like the bouncer was referring to something other than the color of his skin, but Carew was justifiably upset nonetheless. 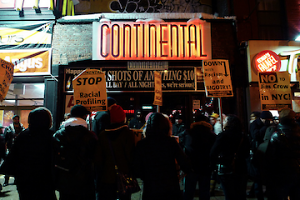 unwritten door policy by saying that he merely doesn't let in people with baggy pants or "bling," and that "It just so happens that more minorities wear these." That doesn't sound very PC, but if the door policy really is more concerned with baggy clothes and obnoxious jewelry than race, who can blame him? Despite the allegations, a recent New York Times article reported that "the crowd was about 30 percent black on a visit in April."

Complaints about both bars abound on the Internet. Most Yelp reviews for Continental that mention racism aren't personal accounts, but for 230 Fifth it's a different story.

"white person after white person is walking inside, some dressed nice, some dressed like they really don't give a damn. All the while anyone who is a minority, black, hispanic, asian, is held on a separate line, watching other people go inside."

After a while his line was apparently told "none of you guys are getting in here tonight." If this is true, that's pretty blatant and, of course, completely unacceptable. Another user writes that when he tried to go, "people dressed in sneakers and ripped clothing were getting in over people that were actually dressed to the nines. seemed to be a race issue." Though many reviewers describe being turned down because of their race, many others claim they were simply turned down because they refused to pay for bottle service.

Owner Steven Greenberg told Gothamist that the bar has an "open door policy" which, if the Yelp reviews are anything to go on, is clearly not the case, but the lawsuit isn't about being denied entry at the door. Greenberg tells his side of the story:

"These people came in without a reservation and brought their own cake. We sat them, we served them, and as the evening wore on they became boisterous and obstructive—they weren't just sitting on the couch, they were blocking the main thoroughfare. We asked if they could move to another couch where they could move around not block the passageway, they refused, and told us they'd leave if we gave them their money back. So we did. And they left. They were there for two or three hours."

The lawsuit argues that Greenberg told the party the cake they were eating would "fuck up my $10,000 sofa," yet white people who were eating nearby were not told to leave.

So let's run through the details one more time: The 16-strong party comes into a generally crowded bar with outside food, allegedly blocks off part of the room, demands they get their money back, allegedly gets yelled at by the owner, receives a refund for the night and then sues for $500 million because other customers weren't also yelled at? Even if Greenberg is as picky and psychotic as interviews and Yelp reviews make him seem, $500 million. I wonder if bringing your own cake and then demanding free drinks works at other bars?