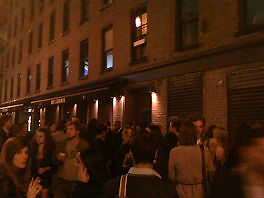 Fashion Week is over, leaving in its wake a trail of (re)christened bars and clubs that will be all the rage at least until Fashion Week returns in February. But if Don Hill's and Lavo were fast out of the gate, there are some dark horses looking to pull ahead in the race for nightlife supremacy.

The Bunker (24 9th Avenue, Meatpacking District): Not the Bunker party, the First Fridays Williamsburg techno bash that will now compete with District 36. But rather The Bunker, pictured above, a 4,000 square foot lair located in an old foundry 40 feet below the Meatpacking District.  If the prime location--in the Meatpacking but insulated from it--wasn't enough to get you excited, consider the man behind it: Beatrice Inn refugee Matt Abramcyk. Eater describes an "extremely large" dancefloor complete with three disco balls, a feature that, on top of District 36 and Sankeys, convinces us that people are suddenly more interested in dancing than sitting and posing.

XIX (19 Kenmare Street, Little Italy): XIX, the relatively under the radar lounge beneath Italian restaurant Travertine, is open for business. The Times already wrote up its tough, Disco-manned door, which even U.S. Open-level tennis stars failed to penetrate. Things should only get tougher as the Fashion Week hordes scatter around town. The latest addition to Kenmare Street's resto-club row has a good shot shot at stealing some thunder from Don Hill's, a venue that, frankly, can only lose heat after a balls-to-the-walls opening week. 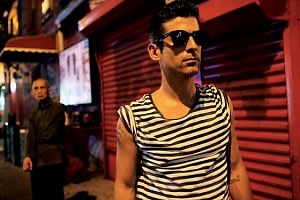 Le Baron (32 Mulberry Street, Chinatown): André Saraiva's stylish Parisian import is one of the fall's most anticipated arrivals. So it's a bit surprising it didn't land on an unassuming stretch of Chinatown in time for Fashion Week. Unless the too cool for school boîte did it stealthily, which wouldn't be at all surprising.

District 36 (29 West 36th Street, Millinery District): New York's most promising proper dance club in recent memory debuts a week from today. What District 36 lacks in bottle service and picky doormen it makes up for with impeccable music programming played over an almost imposingly impressive soundsystem. Inspired by the iconic, sorely missed Twilo, District 36 aims to get New Yorkers dancing again--and they'll have a gargantuan 14,000 square in which to do it.

The Darby (246 West 14th Street, Meatpacking District): Yet another venue passing though the revolving nightlife door that is the Meatpacking District, The Darby has big shoes to fill: the beloved Nell's once occupied its address. Now, Butter's Richie Akiva, Scott Sartiano and chef Alexandra Guarnaschelli have teamed up to bring this throwback supper club to 14th Street.