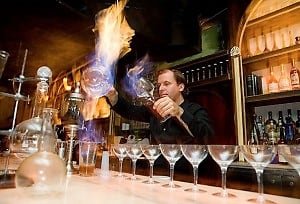 Albert Trummer is known for dreaming up creative cocktails made in over-the-top mixology meets chemistry ways. He was arrested last year for reckless endangerment and arson after setting alcohol on fire at his Chinatown bar Apotheke. In Manhattan Criminal Court yesterday, he rejected a plea deal from prosecutors that would have let him plead guilty to disorderly conduct and avoid jail time.

“I am going to fight this all the way,” Trummer told the New York Times.

But should he? If found guilty, he could spend two years in jail just for taking Tom Cruise's moves in Cocktail up 110 degrees.

[Where to Score Flaming Cocktails in New York City]

That's a long time and he has his new place, Theater Bar, with a real stage and bartenders who do magic, to think about. Just take a look at  this video of a bartender swallowing needles in a cocktail and making them reappear in the neatest way possible.

Can you imagine how many things could go wrong with this trick?  So many, proving that there are plenty of much more dangerous things for Trummer to dream up and get himself thrown in jail for. Setting booze on fire doesn't seem worth it. He can do better. If you are going to go out, go out BIG.

But maybe he will get off. He told the NYT last year:

“But I am not obsessed with fire,” he said. “I am focused on my craft.” He explained that he first began playing with fire for technical reasons, as when making drinks with absinthe where “it was a ritual to flame it off, to make it drinkable — since it’s 40 or 50 proof.”  Eventually, “controlled flaming was also a part of the show,” he said. “But the flame was self-contained, and I became expert at it. There was no danger.”

Trummer also has other cases at hand. He believes that Apotheke co-owner, Heather Tierney, was the one who called the cops on him in order to force him out of the business. Their partnership dispute is in mediation in State Supreme Court in Manhattan.

And if this whole thing couldn't get more sticky, Tierney’s brother Christopher, another partner, also faces a year in prison on charges that he assaulted  Trummer, who has sued the Tierneys for:

"Imprisoning him in the antediluvian Apothéke sub-basement — a reputed opium den long ago — and for inflicting pain, “emotional distress, shock, fright and apprehension” in a dispute involving rights to Apothéke’s trademark."

In case you missed that: "Imprisoning him in the antediluvian Apothéke sub-basement."

So to recap: Fire, Magic, Booze, and Imprisonment.  Someone make a reality show/TV Movie!