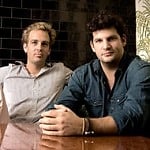 It was none other than Anthony Martignetti. We've long been the proponents of Martignetti's and the old inexpensive dive bar Bella's, however, Bella's latest iteration, Southside, is an expensive dive bar. One which Martignetti is desperately trying to turn into a bottle service type atmosphere where they hawk bottles down patrons throats. It's highway robbery, and quite frankly, in this economy it's an insult. More to come as we chronicle this fledgling bar as it tries to pretend it's something it's not...

The emphasis won’t be on bottle service. Instead, Martignetti says that he and his bartender, Dennis Denisoff...are working on a “gourmet fishbowl.” [NYMag]

Update: A look through better times: