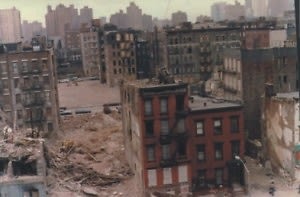 Everyone knows non-locals looking to get their drink on swarm the East Village every weekend. But lately Avenue B has become especially rife with decidedly un-East Village hangouts that infuriate residents and put some Greek letters--namely, Sigma Nu--into Alphabet City.

Monday night's East Village community board meeting heard many complaints over the transformation of lower Avenue B into a veritable Bourbon (or maybe Bleecker) Street. The recent history of blight (as opposed to the old school dereliction pictured above) includes:

Le Souk: The bi-level hookah bar and dance club brought huge and unruly college crowds to the neighborhood. After concerted local opposition and liquor license woes, the late night spot moved from 47 Avenue B to the heart of NYU territory late last year.

China 1: Ostensibly a Chinese restaurant, China 1 was cursed by neighbors on Monday for operating as a nightclub. Walk by on a Saturday night and the velvet rope, bouncers and braying high-heeled crowds will settle any doubts.

And on Monday, Grub Street reported that the owners of Thunder Jackson's on Bleecker Street planned to open:

Hurricane Billy's, a Mardi Gras-themed vomitorium at 25 Avenue B. To get an idea of what the joint, if approved, will look like, ogle some shots taken from Thunder Jackson's official website (thanks, Grieve):

Insult to injury: 25 Avenue B is the former home of Save The Robots, the gritty, drug-fueled after hours spot that in the '80s and '90s brought drag queens and club kids to the then-desolate and dangerous strip.

While this sort of...development seems particularly concentrated on Avenue B between 2nd and 4th Streets, the rest of formerly fearsome, then bohemian and then at least somewhat cool Alphabet City has not been spared. (See: Superdive and Aces and Eights on Avenue A.) And some grungy, laidback holdouts (like Mama's Bar) remain.

Still, the infestation is disheartening. Cheap rents, at least relative to the more established parts of the E.V. west of 1st Avenue, might be to blame. Or it could be a cycle of troubled spots being shuttered only to make way for new unwelcome businesses.

But it's clear that the old saying "Avenue A is for Adventurous, B is for Brave, C is for Crazy and D is for Dead" is in even more need of revision than ever. Maybe Armani, Bourgeois, Comfortable and Dignified?