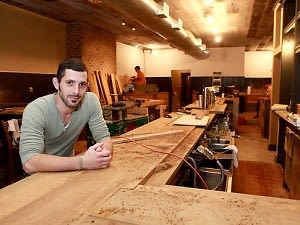 You can't travel between Manhattan and Brooklyn on the L this weekend. But a new bar is transporting King's County to New York, New York. Brooklyneer is coming soon to the Village, and looks to put another dent in the MTA's finances by keeping the Brooklyn-curious in more touristy pastures.

I'm not trying to badmouth tourists, the Village or Brooklyn. Brooklyneer co-owner Billy Waite brought up the just slightly dubious selling point of tourist appeal in an interview with the Daily News, saying:

"If you're a tourist from Madison, Wisconsin, do you think you're going to go to Brooklyn? No."

First off, there are several clutch fromageries in Brooklyn that would attract the Packers crowd. Secondly, when exactly did Wisconsin replace Ohio as the go-to tourist starting point?

Tourist herds won't keep me away from the bar, which will tout the considerable wonders of Brooklyn with beers from Brooklyn Brewery, pickles from Brooklyn Brine and, most wondrously, kielbasa from Steve's Meat Market in Greenpoint. And remember when I told you about the guys making furniture from salvaged Coney Island boardwalk wood? Some of it will wind up here.

It's funny. As some Brooklynites fret that their swiftly gentrifying borough is starting to look too much like Manhattan (witness D.B.A., Lorely, Crif Dogs and a mysterious Lower East Side party spot jumping the river), Manhattan is catching on to the fact that the cat is out of the bag regarding Brooklyn Cool, and using it as a selling point for bars and, as Grieve noted yesterday, Alphabet City apartments.

Maybe construction crews can take their time with those L train "improvements" after all.