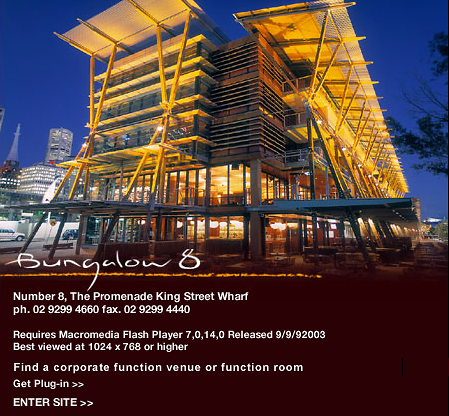 [Another Copycat: Bungalow 8 of Syndey, not related or to be confused with namesake in NYC]

For those of you who thought that NYC was the center of the universe (yes we've all been guilty of this at one time or another), we have new evidence to support this thesis and expand already bloated egos. A new club called Butter just opened up in Shenzhen China. Though the club has no relation to the one and only Butter in New York, its attempt to leverage off the NYC spots' name brand is surely evidence that New York nightlife has a truly global impact on trend-setting. But then again, we all knew this already, right?

And of course this isn't a new phenomenon. Take for example the "Bungalow 8" of Sydney in Darling Harbour. Again, no relation to our muse, the NYC spot. There you won't find Amy Sacco, long "bathroom" lines, or La Lohan, but you might find a great spot for a plate of mussels and some cool Auzzie mates. That being said, I don't look down upon such "borrowing" at least on an artistic level (though there may be legal ramifications). Afterall, Bungalow 8 was named after a spot at the Beverly Hills Hotel.

Rather, it sort of puts a smile my face perhaps because of the implied flattery that I somehow vicariously feel? Or maybe its just nice to see a piece of our city being adopted, and made in China. At least we can feel some of the creature comforts we feel here oveseas. Raise a glass to that!

[Paying Homage To Our Inspiration]