Drinking can impair your ability to spell your own name, not to mention the Hawaiian state bird's. But Sarah Maslin Nir's Times profile of a biweekly spelling bee at Pete's Candy Store shows that kids who used to get their lunch money stolen now have beer money for geeky nightlife pursuits.-

Reformed nerds have plenty of places where they can rediscover their pimply, Magic: The Gathering-loving selves while drinking away the memory of that atomic wedgie in the junior high bathroom stall:

Jenga never had the stigma of Magic cards, pogs or, God help you, Dungeons & Dragons. But it's very hard to look cool while building your own mini Leaning Tower of Pisa once you've emerged from 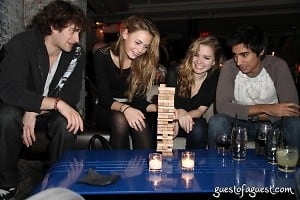 puberty. Give it a try anyway at 675 Bar. Just make sure you leave the heavy drinkers at home--the shakes will ruin any chances of victory.

Glee club kids will never be cool, no matter how many trend pieces tell us Glee has made acapella fashionable. That hasn't stopped the eruption of new karaoke joints all over the city, but especially in the East Village. You know where they are.

The popularity of Connect 4 (aka checkers for the slow) among 4th-graders just goes to show that kids can be amused by anything. Adults amused by gawking at the Olsen twins can head to Sweet Paradise, which has the vintage game and the retro Full House creatures on the menu.

It's a good thing that the prime bully targets who carried Star Trek lunchboxes had no lunch money to be stolen. Ace Bar's got a whole collection of vintage lunchboxes lining a wall that undercuts any feelings of coolness gained by winning a game at the arcade-themed spot's pool table or Skee-Ball alleys.

Finally, if you ever start feeling a bit too big for your pocket protector, make sure to take a trip to pugilist haven Jimmy's Corner in Times Square.