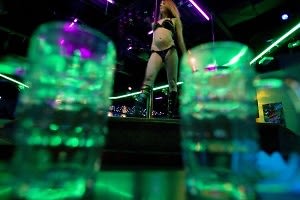 Steven Slater has just been one upped! A Canadian pilot decided not to wait until he got off work to hit the strip club, but instead just landed his plane in the parking lot of one in Montreal.

After landing, the pilot went into the bar, had a good time, and then flew off in his plane.

Officials aren't sure if the man was drinking or not, but it's probably safe to assume that YES, he was plastered.  Pilots are not allowed to fly within 8 hours of drinking, but then again they are also not allowed to land their aircraft in public spaces unless it's an emergency.

The transport authorities are looking into things, but thus far the man has not been charged, reports the Toronto Sun. Canada is far too busy right now being upset that Prince William and Kate Middleton did not show up to the Calgary airport in ridiculous looking 10-gallon white cowboy hats, to care about drunken peep show pilots.