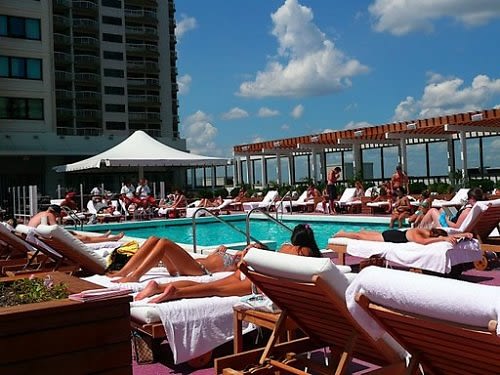 [Poolside at the Chelsea Hotel. Photos via DBTH]

While I was sailing the Atlantic coast this weekend, DBTH was hiding out in Atlantic City at the newly opened Chelsea Hotel. Thankfully he gave us the full report this week so we didn't have to.

So we've covered the rooms. We've covered the pool. What about the Fifth Floor?  As you all know, the Chelsea Hotel team locked up Paul Sevigny and Matt Abramcyk to bring their Beatrice cache out of New York and down to the beach. A bold and risky move for several reasons, but why look back? So what has the arrangement produced so far? We'll tell you. First, like everything else in the hotel, the spaces are retro and suave, with a throwback game room, lounge and pool side bar. Since the weather was so nice all weekend, the space that got the most play was the outdoor space. Friday night was relatively quiet, with some shore rats listening to the Beatrice DJ's spinning. Saturday night is when things got interesting.

[A Return To Glamour- The Chelsea Hotel]