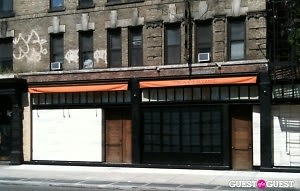 Travertine, a restaurant that opened on Kenmare street and Bowery (only one block away from our offices) last fall, managed to fly under our radar even despite the out-of-place modern marble walls that seemed to scream at us for attention every time we walked by. The one dinner I shared there (out of convenience in location) failed to hook me. Travertine lacked the "I guess I'll put on eye makeup" crowd of the hot spot Kenmare (across the street and one block down), and the "I'm so addicted I'll stand in line for" food of the Banh Mi gods down on Broome.

The opening of Travertine's new lounge, XIX, was set to have the same trajectory. And even if you get the rejects from Paul Sevigny and Nur Khan's door at Kenmare, (run by Megan Ronney and Ashley Ruprecht), can opening a nightclub, er, sorry "lounge," in the dead of August manage to attract anyone's attention? 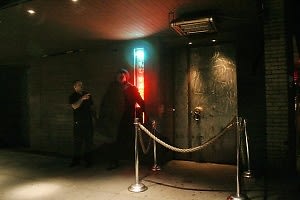 There are few, if any, people working in our offices today who know who Disco is. I know this to be true, sadly, from a mass email sent around to said team members from my partner last week. It pretty much went like this:

QUESTION: "Did you know that Disco is working the door at some place down the street called 'Travertine?!' Who wants to cover this?"

And just like that, another doorman falls into oblivion. Once the face of the most recognizable door in New York City, holding the keys to your entrance into Bungalow 8, back when 27th street had yet to know the names of Home, Guest House, Cain and the like.

DISCO! How we loved him! How happy we were to see him! (on the nights he remembered that we were important).

QUESTION: "How can you guys not know who Disco is?!" 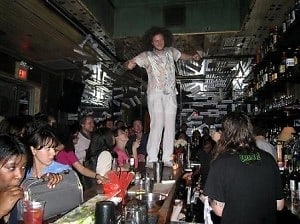 It's easy to look back and reminiscent on the "good old days," easier still to criticize the present nightlife scene and why it's not as raw/cool/real/fun as it was back when the Max's/Area/Passerby/Wax/Bungalow/Beatrice/ were still happening...and the doorman of NYC Nightlife's past are easy triggers to take us back. Similar to smelling something from childhood, or hearing a song that was popular during my freshman year of college, seeing DISCO transports me back to my very first nights out in Manhattan. The "Youth With No Strings Attached" time. The YWNS period is a hard one to pinpoint exact starting and ending dates, though I think it's safe to assume that feeling an attachment to any specific doorman came somewhere in the dead middle of mine.

So Disco is now apparently guarding a set of out-of-place marble doors on Kenmare street at a place no one's ever even heard of more than once. Will he be able to bring Travertine a new "coolness" into it's doors? Is Kenmare street the next 54th st, 27th st., Gansevoort st.? Does it even matter? From last week's NYMag article on Le Baron's Andre Saraiva:

I ask him if he thinks Le Baron can last in the accelerated half-life of New York. "Maybe it won't," he says. "Maybe it will be a small, intense period. Like graffiti. It doesn't stay. I love that about it. I love to let it go." 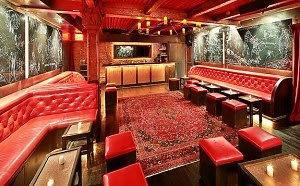 You've gotta keep moving. Even 'Lil Andre knows this, Disco knows this. Everybody knows this. And, if they don't, they will be left behind anyway.  New York City is the city that never sleeps, the city that is always changing...it's why we love it, why it would be hard to live anywhere else that didn't have at least 10 new restaurant openings (a season). Still, am I wrong to lament with my partner over the general unawareness of my office in regards to Disco? The greatest doorman that ever lived?

Probably. Because he is just the greatest doorman that ever lived for me, in a time where smells and songs and doormen were bound to make the most salient scars on my hippocampus.

I doubt XIX is going to be another Bungalow 8, but who's to say that Disco won't be someone else's greatest?