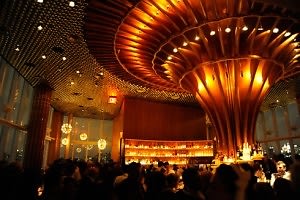 The Boom Boom Room, the Standard's 18th-floor pleasure palace, closed for summer last week. It also got Community Board 2's permission to run as a private club come fall. But does the bar's privacy extend from its membership to the unexplained reasons behind its hiatus and liquor license transition?

Like its exorbitant drink prices, the developments over at Boom Boom Room just don't add up:

Why would one of the most high-profile nightspots in the city close shop in the middle of the summer? Sure, the BBR crowd consists of the type who flee the city each weekend for greener pastures. But remember that the bar is in a hotel and summer is peak tourist season. Between lost revenue from locals on weeknights and tourist stampedes on weekends, the summer vacation seems like a bold move that could result in a scolding from the bar's major league investors (and hotshot designer, Roman and Williams, who don't come cheap), not to mention a loss for the 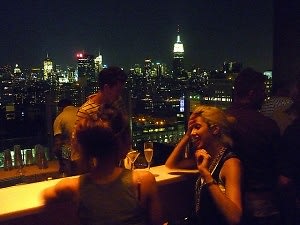 Standard itself, which like Boom Boom is owned by Andre Balazs. Sure, Le Bain (pictured right) picks up some of the slack, but the rooftop spot is subject to the whims of Mother Nature, and Boom Boom's closure denies a no-brainer overflow sponge.

Balazs never made himself the face of Boom Boom the way, and furthermore, he never really found someone to do it for him (such as Ian Schrager did  with Nur Khan at Rose Bar). The lounge also lacked a signature doorman (think Carlos at the Jane), which could imply that the spot never ranked high on its owners long list of priorities or that...

...some unsavory characters successfully crashed the party. Tweets from regulars pondered an unfortunate dip in crowd control. And an anonymous source claimed to see Russian type women working the oldest profession in Boom Boom's lair on more than one occasion.

So now Balazs looks set to convert Boom Boom Room (which is technically Top of the Standard) to a members-only joint. But did he make the move voluntarily or was he forced to save face? More to come...

Photos via Roman and Williams, Gothamist