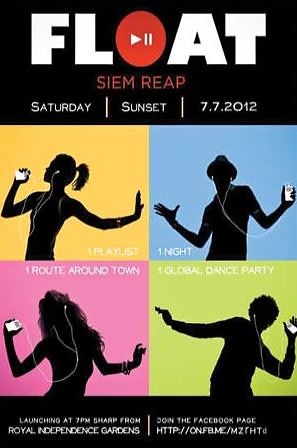 Tully McLoughlin, a Yale grad living in Ghana, teamed up with his college buddy, Alf Molinas, who currently lives in Tokyo, to host the global event of the summer: Global Float --- an international flash mob dance party, promoted by social media to pick up all over the world.

On Saturday, July 7th the first ever Global Float kicked off in Tokyo, Japan. Rie Tai, a participant from Tokyo recounted her experience,

"Some of us climbed up on ledges, waved glow sticks at passing cars and pedestrians, and simply enjoyed the company around us. Floating was a new sensation of dancing. As Madonna once sang, it was literally 'me against the music.' And all too quickly, the 90 minute float concluded at Shibuya Crossing, the heart of Tokyo’s night life."

After the Tokyo float ended it was up to the remaining 26 cities all over the world to keep the dance going. From the streets of Siem Reap to the tundra in Alaska, groups ranging from 2 people to over one hundred grooved to the same tunes. The Global Float continues in a different city at 10 PM where attendees all press play at the same exact time. The playlists are produced and shared via the internet, and Saturday's mix saw the likes of techno remixes by the group's official DJs who produce the playlists from their locations all over the world. The 3 DJs are DJ Romeo (based in Ghana), Tha Boogie Bandit (based in Tokyo), and Adi Kamdar (based in San Fransisco).

The Global Float in New York City started at the High Line Park at 10 PM. To spectators and passersby, the scene looked like a crowd of people dancing in silent. But to those participating in Global Float, they felt like they were a part of a loud movement powered by each others' voices via social media. The New York float party moved from Chelsea Piers to other locations including Hudson River Park, Washington Square Park, and Union Square.

According to Molinas, the events managed to attract a lot of attention. Floaters in Accra shared their ear buds with curious onlookers who quickly became part of the movement. The mayor's wife in New Haven was reportedly one of the first to join the dancing. He is still receiving emails from people in Beijing asking when the next one is.

"The great thing about this event is how inclusive it is. Everyone is welcome to join and to start a float in their town. All that is needed is any device that can play MP3 files. We are already trying to think about the next Global Floating Dance Party. We hope that last weekend's dancers will be part of next GFDP's float organizers wherever in the world they may find themselves."

Floaters can download the playlist from a shared folder HERE. To learn more about the largest dance party of the summer, check out the official website HERE or visit the event's Facebook page HERE.

If anyone is interested in participating, reach out to the GFDP at globalfloatingdanceparty@gmail.com!