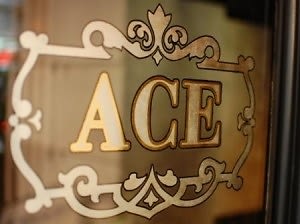 Tech/media/bourgeois bohemian haven the Ace has done an excellent job branding itself as a life-style driven hotel. They're upping the anti with a new partnership. Joining forces with Google, guests will receive Chromebooks pre-installed with an Ace Hotel Google Chrome App so that they can sit in the lobby late at night and pretend to be working on their new start up/novel at faster speed than before.  What's more? -

Custom slipcovers for laptops.  The Observer got its hands on the press release which states:

The Ace x Google slipcover reflects the straightforward sensibility of Ace design and keeps your Chromebook safe while you’re traversing the mean streets of New York. For guests, we’re laying out an extra gift: an Ace x Google designed notebook – with real paper – wearing a John Milton quote from 1634.

Paradise found? With Opening Ceremony, the Breslin, sporadic art shows, violinists in the lobby, patrons who say things like "I've been really getting into Buddhism lately, but the chanting is kind of stressful,"  and now this, the Ace has constructed something so painfully cool that you can't even fight it. The force of hipness is beyond battling. Just succumb and enjoy it.