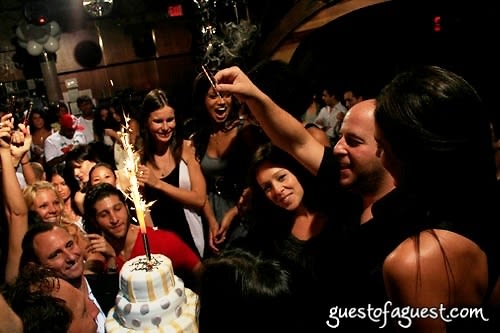 When you're Noah Tepperberg, co-owner and founder of Strategic Group, you get two birthday parties.  And, since his birthday falls in the summer, that meant the first one would be in NYC at Marquee (of course) and the second one would be in the Hamptons at Dune (obviously).  Party he did, and so did his hundreds of friends and wanna-be friends last Thursday at his hot spot Marquee.  I unfortunately missed out on both parties, though I recognize several familiar faces in the crowd, all helping to wish Noah another year full of successes.  Ben Kaufman was there to document the fun.

More photos and story  below:

Chace Crawford, Blake Lively, Leighton Meister, Penn Badgley, Karolina Kurkova, Amanda Hearst, Luigi Tandini, Josh Bernstein ( he has a new show coming out on Discovery called Into the Unknown..it premier's tonight) and Veronica Webb all made it out for Noah's birthday party at a private estate in Watermill, NY....then everyone continued the party at DUNE in Southampton with the exception of the Gossip Girl cast as some of them are still underage.