I guess it's about time to update the "Where the cool kids are" guide. Let me know if you would like to add your two cents. Though lately, the end of summer, calm-before-the-September-fashion-week-storm has hip New Yorkers heading West to bide their late summer night hours in style.  Not to mention Hugh Grant following in their footsteps. So, where are Hugh and other cool New Yorkers going?

The Jane of course. Not that this is surprising, we adore this west village gem.

But where else was Hugh Grant last night?  Today, I got confirmation from friend and Huffington Post editor, Danny Shea, that Hugh Grant was spotted at The Standard Grill earlier in the night. 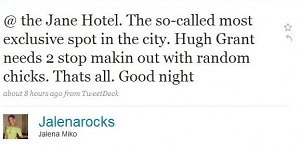 Need a plan to impress the girl tonight?  Follow in the footsteps of Hugh and take her to the Standard for dinner before heading to the Jane to dance the night away.  According to  Jalena Miko's tweet, it seemed to work for him! Let's just hope that the lady he was spotted making out with was girlfriend Jemima Khan (pictured with him above).