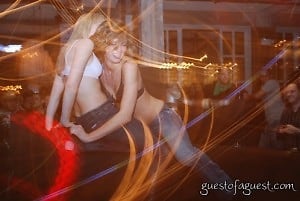 Danger: Put a drunk person on a mechanical bull and there are bound to be accidents.  Urban wannabe cowboy, Christopher Haynes, busted his shinbone while riding the mechanical bull at Johnny Utah's and is suing the bar.

Haynes, whose 38-years-old, went flying nearly one second after the bull began bucking, fracturing his left tibial plateau.  The suit states that he is "permanently disabled" and was "confined to a bed," and asserts that the bar lacks the proper liability insurance and licensing to operate the bull.

Neil Fuhrer, a lawyer for Haynes, tells the Daily News:

"The ride was about to commence. And as he was seating himself on the bull, they cranked it up and threw him off."

This is the third time the bar has been taken to court over injuries. Everyone who rides must be 18 and sign a waiver that warns riders of possible death or paralysis.  But what does that mean in the face of a bucket of booze and potential glory?

In college (I can't believe I am admitting this), I used to don a midriff and travel on weekends for a certain alcohol brand whose tent at festivals and concerts included a mechanical bull. Everyone signed a waiver and plenty had a nice, fun ride. I'd say that at least 3 times a day though, someone would get injured, the worst being a guy whose face went crashing into the saddle and broke his nose. There's nothing more scarring than getting blood on your branded school girl uniform.

Let this be a cautionary tale: Listen to waivers or learn the sad fact you are not John Travolta...or worse. If someone gave you a gun, let you drink for three hours and then asked you to play Russian Roulette you probably wouldn't. This is pretty much the same thing with a more Western theme.