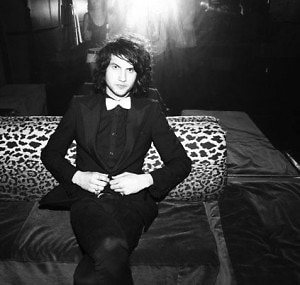 Adrien Wend is a tall Parisian who runs an indie rock club called "le Tigre" in Paris. But don't be mistaken, the guy knows more than a few things about NYC nightlife: he also can be found DJ'ing at the Jane Ballroom, organizing parties at Westway, and hanging out at Kenmare. Our French fashion week correpondant, Ruben N from tendaysinparis.com sits down with Adrien to find out more on NYC vs Paris nighlife, his favorite spots and what kind of girls he fancies.

Can you tell a little about yourself and your occupation?

What brought you to NYC?

I first came in 2008, I lived 3 month in the city with one of my best friends who is actually a New Yorker. We were in the same band, except fun, nothing serious happen with this band, but I learn about all those awesome New York parties and I started to go there, in 2008, it was the time of Beatrice.... That summer I was there to dj and promote le Tigre club here in nyc, so we threw two parties with Roxane Decourtois the owner of le Tigre, at Madame Wong's and Westway.

As Parisian how would you describe NYC nightlife?

Parisian night life is like an old woman who had a lot of amazing parties in her life and she is a bit tired right now, NYC night life would be her grand daughter across the atlantic with a burger in her hands instead of a baguette. Paris has the same level of madness but not the same young strong legs that can push past the strain of partying again and again.

What's the main thing that NY nightlife should learn from Paris?

Serve real champagne, close after 4am and hire Parisian DJs.

And what Paris should learn from NYC?

Paris needs to learn to show up, cheer up, and open up to the party. There is a lot of staying in your corner at your table with your friends which could just as easily be done at home. also more communal late night food places, and cabs.

What is your typical night intinerary in nyc?

This summer, I would often start at "cabin" then, most of the time I was at Kenmare and Madame Wong's (particulary when dj whitwhit and japanster were playing). I also had a lot of fun at Westway on Tuesdays and The Dream Hotel on Mondays. Sometimes at 4am, I was ok to go to some afterparty.

For a wild night, Parisian or NYC girls?

For a wild night…. a mute girl… doesn't matter where she comes from. euuuu no I'm kidding, i would say both at the same time, if they'd agree......

How would you convince a NYorker to come to Paris with you?

Come, dance and swim: " La seine " is a thermal water.