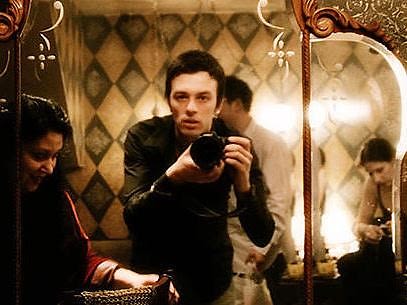 He was named the 2007 Nightlife Photographer of the Year by The L Magazine, and you can bet he was present at the party to take the pictures. Nikola Tamindzic, self -described as "gawker.com's resident photographer/provocateur, and a taller, rather more mobile version of Larry Flynt" has taken this city by storm. He is a well known name in photography, especially New York nightlife photography, shooting both big names and no-names. Arriving to the city in 2004, Nikola stumbled into a Halloween party hosted in a Soho loft. The loft belonged to Gawker's Nick Denton, and Nikola quickly became the media mogul's prized pet. Now the darling of Gawker media, he has proven that he can stand on his own. And his unique photos are helping to keep this city and it's nightlife alive. Now, we feel honored to get our questions answered by Nikola himself. Read below to hear about his happy childhood, his love of Denton's apartment (we hear it's pretty posh), and his friendship with Kenny Kenny...

What did you want to be when you "grew up"? Garbageman. In Belgrade, they used to ride on the backs of the trucks, and to a kid that seemed like the coolest thing ever. "What, you get to hang off the back off a truck AND get paid to do it? Awesome!"

What was your childhood like? Happy. For no particular reason, but just a good, quality childhood. I remember coming across a Playboy-type magazine that my parents never even thought about concealing - I was around 4 at the time - and being absolutely riveted by the sight of nude bodies. Not exactly turned on - more in awe of such beauty.

Then, in my teenage years, my dad and I used to criss-cross Eastern and Western Europe in a car for the entire second half of the '80s, before the Wall came down, and I remember the sounds of many languages, and different smells of cities, and lights of border crossings as the most romantic and intoxicating of things.

Before moving to New York, you lived and worked in Chicago. What were the pros and cons about living in Chicago compared to here? New York draws things out of you that you didn't think capable of. It pushes you hard. It makes you hustle. It's just a big ball of incredible energy, of all these people who came here with the desire to DO something. You can ride that energy, or it can fuck you up big time.

Chicago is a lot more relaxed - that works for some people, and didn't work for me in the long run. That said, if I was in music industry, I'd want to be there - such an incredible place for music.

Where was the best party you've ever been to in New York? Oooooh, so many. Ed Banger party earlier this year, and LCD Soundsystem at Hiro during Fashion Week. But Fela Kuti-themed party in some Greenpoint warehouse, back in 2003, holds a very special place in my heart - what an incredible night.

You have been quoted saying "I'm drawn to things that may be conflicted"…What's the biggest conflict you've personally had? Fishing for gossip, huh? No, I didn't mean conflicts between people - that's always fun to talk about. No, what I'm drawn to are things that are INTERNALLY conflicted. I'm drawn to contradictions. We're all conflicted most of the time - and capturing that, or that moment we admit to ourselves how torn we are - that's very exciting for a photographer, as much as it would be for any storyteller. Such drama!

What do you think will be the new hot thing to take NY Nightlife by storm? There are so many "NY Nightlifes" that I couldn't possibly tell. Step away ten blocks from Lower East Side, and you might as well be on another planet. I don't see myself working as part of the nightlife scene - because it's not nightlife in itself that interests me, but the contradictions involved, which is what I'm trying to capture in my other photo work.

Where are some of your favorite places in the city? There are some spots that just have a good party karma. Happy Ending. Nick Denton's apartment. My fire escape.

What are the gawker offices really like? Pale green & sterile! But why ask, when you can go and check them out; they work in an aquarium-type space on 89 Crosby, just stand on the street and gawk at them. It's only fair.

Who do you admire? Helmut Newton, Terry Richardson and David Lynch for creating worlds of their own, and Henri de Toulouse Lautrec, Brassaï, and Lee Friedlander for seeing more in our world than others did.

What are you most afraid of? Sucking.

What do you think is the most important character trait in someone? Substance.

What do you think is your best trait? Indefatigable ego tempered by constant questioning & evaluation. 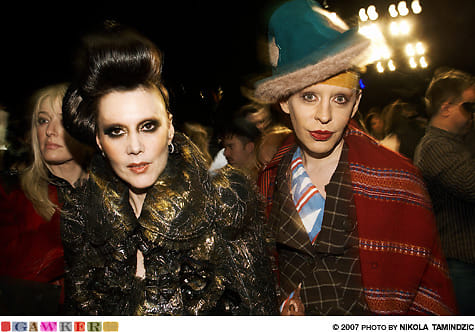 What is one of your favorite photos? Favorite shoots? Seducing Kenny Kenny into letting me take the photos I knew we could take. Snapping J-Lo while performing a turn on the floor, scowled at by bodyguards, and somehow ending up with a classic '50s Hollywood portrait in the process. Photographing a blind girl, and having her see herself through my eyes.

Where do you see yourself in 5 years? Getting that much closer to figuring out what gets me going, and probably realizing that the more I find out, the less I know. That's why doing this could never get boring, could never get old.

Will you ever get sick of New York City? Its nightlife? That's what I'm talking about. I don't think so, as long as there's something identifiably New York about this city - and in spite of real estate madness, there still is. (In fact, if you look at issues of Village Voice from 40 years ago, you'll notice the exact same problems and exact same complaints as today.)

And nightlife? It'll always go in cycles. Unless you're invested fully in nightlife as a job, which a lot of scene people are, then you go in & out of it in 6-month intervals. Right now, I'm kinda out of it, probably cause no one wants to spend the summer in a sticky bar. But fall is the best for nightlife, so I'm sure you'll be seeing me a lot more in the next couple of months.

Well we are looking forward to seeing him "at work" this fall. If you miss one of the parties he may cover for Gawker Denton, you can always go to his myspace page, or his personal site Ambrel where he displays his all of his current work.