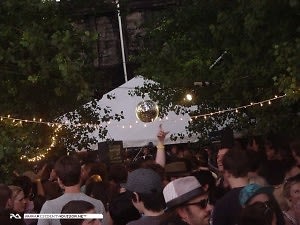 Sunday Best, the city's finest outdoor summer dance party, may have reached a tipping point last week. The music killed, the vibe rocked and the place was packed. Too packed. And, waddya know, the Times gave the bash even more (unwelcome?) exposure today. The word is out, but is there any way to get it back in? 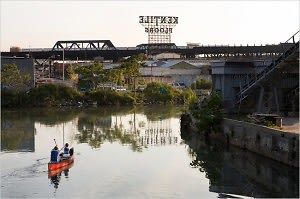 "The Gowanus micro-neighborhood...is enjoying its moment in the summer sun, drawing the city’s hipsters to its art galleries and rock-climbing gyms, its nightclubs and rooftop film series. The half-empty warehouses and semi-derelict factories — for so long seen as post-industrial blight — now give Gowanus a special cultural edge, like a miniature Baltimore or Detroit (with terrifying pollution substituting for terrifying crime)."

Naturally, this utopia is threatened by rapacious developers and hungry artists yearning to be twee and fleeing over and done with bohemian havens like the Lower East Side and Williamsburg. But thanks in part to the filthy Gowanus Canal, a newly crowned Superfund site, the edge probably won't dull anytime soon.

So let's enjoy Sunday Best while we can, right? Gross seems to dig it:

"In a grove of leafy trees, hundreds of women (exposed shoulders, gladiator sandals) and men (straw hats, crisp shorts, multicolored Nikes) swayed to the effervescent beats of Michael Mayer, a techno D.J. from Cologne, Germany...The line for drinks (sangria, Sixpoint Craft Ales) stretched nearly as long as the line for the portable toilets."

I was there on Sunday and can verify Gross's report! Actually, the portable toilet line, on which I waited a mere 10 minutes, paled in comparison to a drink line that snaked underneath a heat-entrapping tent and which I had to flee once I thought I was about to faint after a 25-minute or so queue.

Worst of all, I left without a beverage. 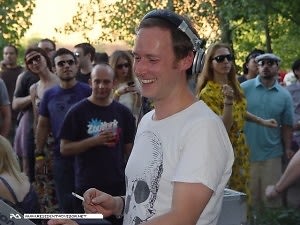 "really long lines...to get in and then to buy a drink. the word has definitely gotten out about this wonderful venue...boo hoo in some ways. we still loved grooving to the music and having fun people watching."

"lines were terrible, vibe was great, overall i had a great time and mayer was slammin"

To be fair, Sunday's event was the season's first. And co-organizers (and stellar resident D.J.s) Justin Carter and Eamon Harkin pledged to work out the opening kinks. The sophomore outing is Sunday and headlined by D.J. Koze, who many cite as the best spinner in the world.

Bottom line: Sunday Best is so popular no one goes there anymore. Trust me! Don't show up! No one will! Except for those of us who'd like to enjoy it with a a cold brew.