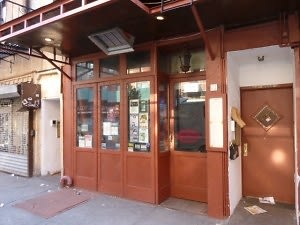 Avenue B may have finally found a worthy successor to legendary after hours haunt Save the Robots. And it could be at the ostensibly shuttered Le Souk. Recent suspicious activity at the address suggests that whatever nightspot is currently running there has redefined the soft opening.

A few weeks ago EVGrieve noted some work going on in the old Le Souk space, which had been dormant since last November. Or had it? A tipster reported seeing people streaming out of the joint at 4, 5 and 6 in the morning. This despite the fact that were no permits on file with the Department of Buildings.

Today Grieve got word and photographic evidence of a crowd of 18 people gathered just outside Le Souk's former home. And at the post-closing time hour of 4:30 am, no less. What is going on at 49 Avenue B?

If a bar or club is in (what we're pretty sure would be illegal) operation, it could be the most under-the-radar, and thereby coolest, hangout in the city. Think about it: no regard for liquor laws, no website, no phone number (a call to the old Avenue B number directed me to the new Le Souk on Laguardia Place). Hell, there's not even a name. 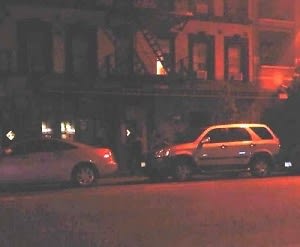 Assuming the 18 smokers gathered outside came from a party indoors and didn't just randomly bump into each other during their 4:30 am ciggie break, 49 Avenue B is the culmination of several recent nightlife trends.

Its nondescript facade makes it a neo-speakeasy. Its exclusive, in-the-know crowd makes it competition for the soon-to-be members only Boom Boom Room. And its on the DL after hours schedule is reminiscent of the infamous Mike's Apartment.

But it could be relatively tame. After all, shady and illicit as 49 Avenue B might be, its patrons still comply with the smoking ban.

le souk• Boom Boom Room• After Hours• Save the Robots