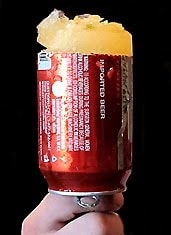 Diablo Royale Este has taken the mostly forgotten "icing" trend to a new, distressingly literal level. The hopsicle is a "a frozen can of beer, sliced in half and served like a Push Pop for big kids." Drink, or rather lick, up?-

As Urban Daddy, who had the privilege of introducing this creation, describes it, the hopsicle sounds downright artisanal:

"Barman-witchdoctors at Diablo have taken the 'icy' bit quite literally, injecting...beer with simple syrup and lime juice, jamming a wooden stick into the hole of the can and then putting it in the freezer. For four days. The result is a genuine beer popsicle, which the bartender must saw in half with a serrated steak knife (or samurai sword) to open."

Thanks to liquor-infused cupcakes, we already know that mixing childhood confections and adult beverages is a recipe for disaster. The hopsicle is an even lamer, and riskier, creation.

For one thing, we all learned that beer is sticky when it was our turn to mop the dorm room floor after a frosh year kegger. The slow, stealth drip of Tecate onto our hands as the Hopsicle melts away would make for the wrong kind of sticky fingers during a night out. For another, the edges of that sawed-off can must be sharp. Not since shotgunning a Natty Light has drinking posed such a threat to your booze portal.

Certain treats, like Charleston Chews, taste better frozen. Some prefer a frozen margarita to the real thing. And there's nothing inherently wrong with enjoying your alcohol in solid form. I wouldn't judge post-grads who never moved past the jello shot phase. Well, I wouldn't judge them audibly.

But although the hopsicle doesn't quite rival vodka eyeballing in terms of sheer drunken stupidity, it should raise eyebrows. Especially if you order it doused in tequila.