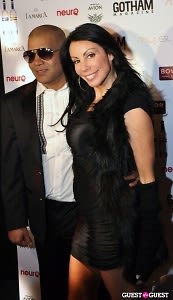 Grammy Award-winning musician John Legend and his gorgeous supermodel girlfriend, Christine Teigen, were definitely the cool kids at Gotham Magazine’s Holiday Party last night. They were in good company, though, ready to bowl the night away with a mix of musicians, actors, fashionistas and socialites.

The party took place at the opening of Bowlmor Times Square, where guests arrived with donations benefiting Toys for Tots.

“We love bowling, we love toys, and we love tots!” John Legend said. “Seriously though, we love bowling. For a while when I was touring, we’d go to the local bowling alleys, and we got pretty good for a while. We kinda maxed out, but I’m ready to get some shoes and try again tonight!”

He also said he was so grateful for his five Grammy nominations and hoped this holiday season would bring "relaxation and some Grammys!" Teigen spilled the beans, thought, that that Legend's a big re-gifter.

"Well, yes," he admitted. "I get a lot of swag bags, and other people would really enjoy the some of the stuff I wouldn't use."

Simon Huck, the public relations mastermind on "The Spin Crowd" was there to party along with Danielle Staub, our favorite New Jersey Real Housewife .

Now wait: is this dude really a prince?

Staub and Prince Malik, a record producer and recording artist, plan to make a "huge announcement" about a future musical collaboration very soon. She wouldn’t let on as to whether they shared more than musical chemistry, but when I asked if they might soon be outshining Wills and Kate as the new “royal” couple, she had this to say:

Dina Manzo the former NJ Housewive who- err- isn’t exactly Staub’s favorite person, was in attendance as well. The two didn’t care to comment on one another, and as far as we know, no drama went down in the bowling lanes between the ladies.

One of our favorites, Alexa Winner, dazzled on the red carpet in a LBD by new designer Danielle Ausier. 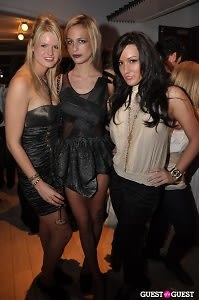 Thora Birch, the star of "American Beauty" who is rehearsing for the upcoming off-Broadway show Dracula, looked alluringly demure on the red carpet. 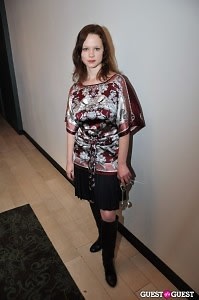 Chef David Burke, the party's culinary director, said if you're a city girl like me who doesn't cook, "Find a really good restaurant that delivers." On it!

And Sean Garrett, the immensely talented rapper and record producer for big names like Beyoncé, Usher and Nicki Minaj, said he's busy this holiday season working on,"everything, with everyone." His own album will be released sometime in spring 2011.

Props to supermodel Christine Tiegen for kicking off her stilettos and lacing on those oh-so-sexy bowling shoes!

Go HERE for more photos by Alex Mora, and tag yourself and your friends.