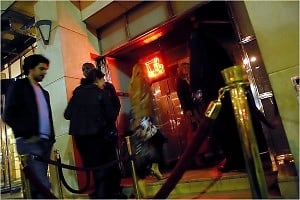 August's crickets and tumbleweeds make for a great excuse to look forward to fall. So it figures that New York would activate the hype machine for the local outpost of Paris's Le Baron, coming soon to Chinatown. But will one of the season's buzziest new clubs be a bust? -

Brought to you by André Saraiva, owner of Le Barons in Paris and Tokyo, the club hopes to make a fancy splash in what is still a somewhat unlikely location.

The hipster colonization of Chinatown is old news. But the neighborhood's restaurants and nightspots (hey, Winnie's!) have stayed refreshingly downmarket. Two recent exceptions are Santos Party House and Apotheke, which are a few blocks in either direction from Le Baron's future home at 32 Mulberry Street.

Santos has defied the conventional wisdom that a big club can't make it in today's NYC by going strong for over two years. But while its eclectic programming--house one night, hip-hop the next, with early bird indie, noise and electro rock concerts thrown into the mix--is a welcome throwback to old school clubbing, it's prevented the place from becoming a consistent go-to destination. Apotheke had its brief moment. But the sit and pose crowd moved on. A recent appearance on Real Housewives of New York was the nail in the coffin of cool and was followed by the FDNY literally extinguishing the club's fire.

Is a frog really the best candidate to put Chinatown on the map? Locals and fans of the still-grimy neighborhood probably hope not. But Saraiva, left, has a hit with Le Bain, which he "curates" alongside André Balazs. Still, we're skeptical, especially since Paris's mainstream nightlife is in the same death throes as New York's.