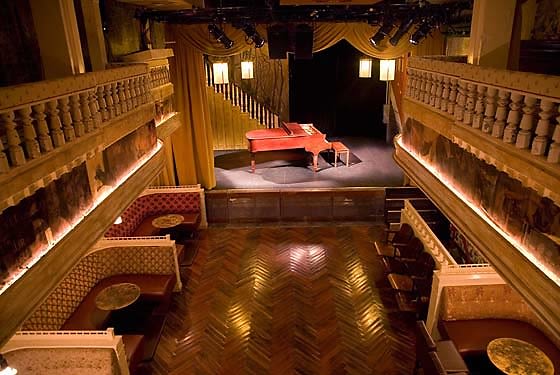 Though we have reported on our nights at The Box before, our accounts are likely a bit off,  given the hypnotic trances we often find ourselves under after each visit.  That is precisely why, a report from an insider there is exactly what you need to get a better idea of just what goes on, although it is all "mysterious, very mysterious."  NY Mag first reported on the box back in February, but it's the report from Michael Harr today that we really enjoyed:

What’s the wildest thing you’ve seen onstage? I’m not at liberty to go into details of what the show contains. The show changes every night. It’s like opening a birthday present.

How does the average Joe reserve a table there? How selective is the process? What they would normally do is go through the Website, e-mail one of the managers or even the owner, and tell them how big their party is. The Box would tell them the price depending on where they are [tables cost between $600 and $2,000]. They’d have a table reservation for after midnight or at midnight.

Can someone get in just because they’re dressed well and in keeping with the spirit of the place — say in a tuxedo and top hat? No. We still have to know them.

What’s the vibe like after the show is over? When the curtains are drawn, it doesn’t mean that the carnival has ended. We keep people entertained while the stage show isn’t running.

How so? That I can’t say. It’s mysterious, very mysterious.

We agree on the mysteriousness.  For us it's trying to figure out the next day just what happened the night before and whether we were in an amazing out-of-this-world type fantasy, or a bizarre nightmare.