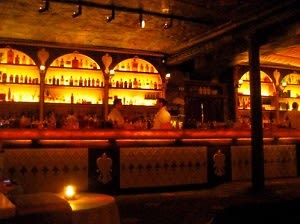 The team behind absinthe-centric Chinatown lounge Apotheke just got cleared to open Pulqueria, a taco and margarita joint next door on Doyers Street. Pulqueria might seem like an affront on the area's innumerable dumpling holes-in-the-wall and noodle shops. But it's really just another instance of NYC bars, restaurants and clandestine strip clubs operating in unexpected places. Some of the spots below are stubborn holdouts. Others are examples of neighborhood imperialism. But all make for pleasant detours from the scenes that surround them....

If you need a break from SoHo's pricey boutiques, bypass the hood's similarly upscale restaurants and lounges and hit this Spring Street outlier. The no-frills Milady's has gruff barmaids, a well-worn pool table and, speaking of bypasses, pub grub like cheese fries and mozzarella sticks. Don't worry about looking too unfashionable either: no less a style icon than Kate Moss has ducked into (only to be tossed out of) this laid back oasis.

For New Yorkers, avoiding tourist-clogged Times Square is practically a blood sport. But if you should ever find yourself among lost in the lost, shuffling crowds, get yourself to this magnificent anachronism. Jimmy's Corner owes its intense boxing theme to owner and professional trainer Jimmy Glenn. (The ringside photos lining the walls are practically sepia-toned.) You'll find Jimmy and his family serving dirt cheap drinks behind the bar, a friendly crowd of regulars and an unbeatable jukebox playing music from a time when Times Square was known for an entirely different class of streetwalker.

The LES might have lost much of its edge, but Allen & Delancey sticks out for its welcome dose of grownup refinement. Opened in 2007 by uptown chef Neil Ferguson (who holds the dubious distinction of being one of the many minions fired by renowned lunatic Gordon Ramsey), the restaurant has since changed hands. But its sophisticated-yet-unfussy Anglo/New American food and romantic, candlelit digs (think posh bordello) still offer a nice alternative to the Lower East Side routine.

The 55 year-old 2nd Avenue Deli survived the tragic murder of owner Abe Lebewohl in 1996, but lost a landlord dispute two years ago. Forced to move off its titular location in the East Village, the adored Jewish deli moved uptown to a Murray Hill side street off of not 2nd, but 3rd Avenue. Any resulting confusion will be put to rest upon tasting the landmark's famous corned beef, pastrami and matzoh-ball soup. Wash it all down with an egg cream, forget how the city's ruthless real estate market often threatens icons like this and be glad it survived in any form.

Because even the staid Financial District needs a neo-speakeasy. Initially, Cordato's looks like the bodegas on every other block in Manhattan. But walk past the rows of neatly stacked Pringles, go through an unmarked door and you'll suddenly find yourself getting a lap dance in the deli's dimly lit backroom. Some visitors claim the nudity has become as watered down as the bar's drinks. That's what you get when the neighbors start complaining. But whether you're leaving the trading floor or a construction site, Cordato's is the most unique nightspot in a neighborhood largely devoid of them.