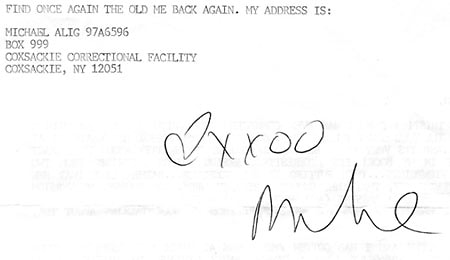 Until I met Steve Lewis, I had no idea who Micheal Alig was.  In fact, I didn't know that club kids had even existed, (I KNEW there was something missing in my life).  Fast forward four years and I'm dressing as them for Halloween and quoting lines from "Party Monster".  Don't get the wrong idea: I don't support drugs, violence, or wasting your life in clubland.  I think I just like the idea of these characters running around Manhattan with too much creative energy for even themselves to handle.  That being said, Michael Alig will remain a mystery to me, (until Steve takes me to meet him in the flesh as promised), but his club kid spirit is still alive in the young regulars of nightlife today.  He's never had the chance to step foot in The Box, Bea, or 1oak, but we all are stepping into a part of him each time we enter a club today.  Michael helped establish the rules of what makes a successful club and, discounting his wrong doings (and they are substantial), that is something we can thank him for.

We can also thank Steve Lewis for that matter.  He had as much of a hand in shaping the scene as well (and I don't mean bottle service). I mean the energy and vibe, the design of such staples as Marquee, Butter, and Dune, the crowd, the ambiance.  Chances are if you're in a club today, it was designed by Steve Lewis.  A guy who's been in the trenches, seen the highs and lows, the under belly of nightlife, been to jail and back and somehow managed to re-emerge with a clear head on his shoulders.

There is no doubt, however, that were it not for industry loyalty, Steve's comeback wouldn't have happened no matter how talented he may be.  And that tone was set by none other than Steve Lewis himself.  I talk about Steve's loyalty a lot.  Perhaps the best way to illustrate this is to show you this letter that Michael Alig wrote to Steve from prison.  Perhaps their relationship is bordering on dysfunctional.  I'm not going to be the arbiter of that.  But I do know that Steve is most likely the ONLY one who has gone to see Michael in prison in a very long time, despite substantial differences. Here are parts of it:

I WOULD ALSO LIKE TO THANK YOU ... FOR SAYING SUCH NICE THINGS ABOUT ME IN YOUR BLOG. YOUR ASSESSMENT OF ME ... BECOMING DARTH VADER ... AFTER FALLING SO HEAVILY INTO DRUGS ... WAS SPOT ON. BUT IT WAS YOUR RECOLLECTION OF ME ... AND OUR FRIENDSHIP ... BEFORE I BECAME A DRUG ADDICT ... THAT REALLY GOT TO ME. WHATEVER OUR MINOR CREATIVE DIFFERENCES IN OPERATING NIGHTCLUBS- - AND REALLY, THEY WERE MINOR, AS ULTIMATELY WE BOTH HAD THE SAME IDEA OF WHAT MADE A CLUB HOT –UNDERNEATH IT ALL, I HAVE ALWAYS CONSIDERED YOU ONE OF MY CLOSE AND TRUE FRIENDS ... SOMETHING I HOPE WILL COME ACROSS IN MY BOOK. I WOULD BE HAPPY TO HEAR FROM YOU ONE DAY, STEVEN! I THINK YOU WOULD BE PLEASANTLY SURPRISED ... TO FIND ONCE AGAIN THE OLD ME BACK AGAIN. MY ADDRESS IS:

PS Today I went before the parole board for the 2nd time! It was grueling ... having to go back + relive that terrible, terrible morning ... I was feeling like shit when I got back to my room + then I saw Maurice’s letter w/ your blog + after reading it my whole day turned around ... Just wanted to thank you for sharing that with me!