So says the headline in the "Janestreeter," (see below) a newsletter of the Jane Street Block Association, Inc. The Jane Hotel, with it's hotter than hot "Ballroom" may have found a place in our hearts this summer, but it's having a tougher time convincing the the neighbors. "For the past several months, our neighbors at the far western end of Jane Street have been dismayed by events at the Jane Hotel." ...Starts the newletter (full version below).  This is going to present MAJOR roadblocks for the hotel's plan to open a rooftop bar. Read more below....

"The hotel's original application to the State Liquor Authority sought a "hotel" license with "background music only." But now the hotel is operating a noisy nightclub, with amplified music audible to neighbors well into the early morning hours. Unruly crowds spilling onto the sidewalk and honking taxi horns add to the problem.

As pointed out in a letter from Barry Malin, the attorney retained by the neighbors, the current situation is far from the 'background music only' claimed by the hotel in their license application. In addition, the neighbors, organized as 'Jane Street Neighbors United,' are concerned about the hotel's plan to operate a rooftop bar.

The Jane Street Block Association has written to the State Liquor Authority in support of our neighbors and urging the denial of the additional license."

Apparently the Jane's (rumored) offer to guarantee entrance to any patron that proves they live within a five block radius isn't enough of an incentive for these neighbors to keep the place in business.

In any case, Liz and her trusty men at the gates (and around the block), are going to have to be even more strict with the mobs of people trying to get access to the Jane....which poses the next question, will anyone want to keep going to the Jane if it means rude treatment outside? You decide. 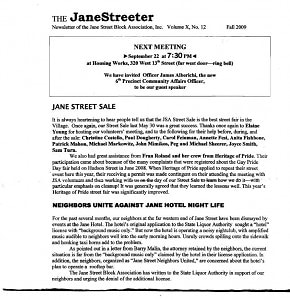