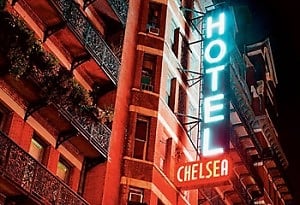 The Chelsea Room is the latest New York nightlife option to (some say) disappointingly mimic Los Angeles by running out of a hotel. It's also yet another instance of bar and club gurus looking to and replicating Olde New York in an effort to drag the city out of its current doldrums. Bifaro tells the Wall Street Journal's Priya Rao:

"We wanted to bring it back to that old historic, classic vibe. It's supposed to feel like you're not really in 2010, but you're back in the early 1900s."

The 2,700 square foot space accomplishes this with rustic touches (another trend) like wood from an upstate barn and old school cocktails--the Chelsea comprises gin, lemon juice and honey--priced at what Bifaro insists is a reasonable $13.

But any operation running out of the Chelsea needn't look far for historical inspiration. The hotel's rich creative roots include extended stays from the likes of O. Henry, Tennessee Williams, Sid Vicious and his doomed girlfriend Nancy Spungen, whose ghost, legend has it, haunts Room 100 where she was murdered.

The Chelsea can still claim to be artsy (Ethan Hawke lives there), if in a less freewheeling bohemian way (Andy Warhol shot his druggie 3-hour Chelsea Girls drag queen opus there). Still, what's the point of bringing in outside nightlife talent to liven things up when seasoned vets are in the house?

Imagine what Club Kid survivor and wacky-raucous-scantily clad nightlife pioneer Susanne Bartsch could do with the place. And she'd only have to take the elevator down from the 7th floor to run the joint.