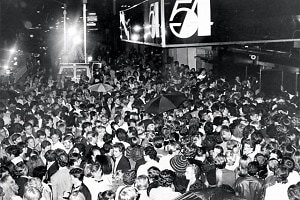 Beloved diner owner, France-hating Frenchman and man of reason Florent Morellet is tired of New Yorkers who are tired of the local nocturnal scene. It's time to snap out of it, in the words of one cinematic New Yorker, and start something new rather than mourn the old. What places do we need to get over? -

Morellet spoke to the Daily News about the ""terrible disease known as nostalgia" just as Florent: Queen of the Meat Market, a nostalgic documentary about his eponymous pioneering meatpacking District canteen, is set the premiere Thursday. To all the people kvetching about the cheesy new Meatpacking District, the shiny new Times Square and SoHo's transformation into an open-air mall, Morellet says:

""Stop! I didn't move here from bum-fuck France to live in a city that has to be frozen at the bottom of its depression."

The man has been at this for awhile. Morellet had had enough two years ago when Florent closed  and set off a wave of tear-stained reminiscences about the old New York, saying:

"I moved to Paris, but you know what? Paris is awful! Americans, they love Paris, but I absolutely hate Paris. It is always gray, it is always the same. So I came to New York for the reason everyone comes to New York, because it is the city of changes. People forget this is what they love about New York. They get old, they get grumpy. They get … nostalgic.”

Clearly nostalgia is a dirty word to the frogs. And maybe for good reason. 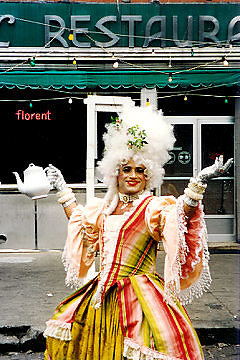 New York nightlife has a rich history that shouldn't be forgotten. I miss its golden age even though, or maybe because, I never lived it. But Morellet has a point. To mope is not to cope. And it might be more useful to come up with something fresh than to complain about all that's rotten.

Consider wonderful blogs like Jeremiahs' Vanishing New York and EV Grieve that chronicle the demise of old New York day in and day out. These and other sites are invaluable records of New York's past. They're welcome digital soapboxes for protests against the city's contemporary misdirection. And they speak up, happily, about rare hopeful developments, like a used bookstore opening on Avenue A, that go against the grain of twee boutiques and luxury condos monopolizing the city. But sometimes I wonder if they spend too much time writing obituaries and too little time seeking out promising birth announcements. Sure, the former often outweighs the latter. But it makes for depressing reading.

In order to move forward, below are the five places most in need of an in memoriam moratorium:

Studio 54, 1977-1986: Disco, Warhol, Bianca on a (literal) white horse, cocaine, a regrettable Mike Myers movie. Studio 54 is the city's most legendary nightclub. It's time to accept that it will never be replicated and stop trotting out the wan 54 comparisons for every new "hot spot."

CBGB, 1973-2006: Studio 54's grimy downtown punk cousin, its polar opposite in everything but influence and fuzzy memories generated within. It's a John Varvatos store now; that is absurd. But the truth is that even if punk is not dead, CBGB had been on life support for years before its plug was pulled.

Limelight, 1983-1997ish: The good: club kids. The bad: K-Holes. The ugly: murder. Time to kill the memories of this one off, even if the mall currently occupying the club's 6th Avenue church almost makes us long for the return of Michael Alig to the city's nightlife.

Beatrice Inn, 2006-2009: An outlier given its brief lifespan and failure to break any new ground (aside from hastening bottle service's demise), the most recent nightlife king to fall still gets more press mentions than just about any bar or club in operation. We're guilty of perpetuating this and vow to change.

Photo 1 via Gothamist via Life, 2 via NYDN