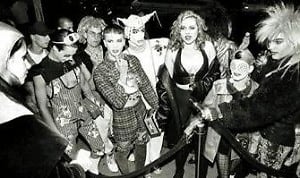 We know New Yorkers are broke homebodies. And that NYC nightlife is in the doldrums. But people have taken advantage of previous droughts and turned things around. Reviving the tradition of designated weeknight misbehavior might be the best way to do it.

In the not-so-distant past, there was a weeknight party for every demographic. In the '90s, trannys and the adventurous night owls who loved them flocked to Jackie 60 on Tuesday nights in the still-interesting Meatpacking District. A similar crowed joined drug-addled club kids and assorted celebrities at the Limelight's infamous Wednesday night Disco 2000 party.

Even in nightlife's neutered post-Giuliana days, school night parties endured. Butter might not have had a name for its Monday congregations. But they were dominant enough to inspire Bar Martignetti's tongue-in-cheek I Can't Believe It's Not Butter hoedowns, which also insured Tuesday morning hangovers. And though it was no substitute for Disco 2000 despite a cheeky name, Blue Owl won rave reviews for The Hump on, you guessed it, Wednesday nights.

These days, New Wave and electro-leaning indie kids have NC-17 (at Lit) and 'TisWas (roving) on Tuesdays. Chelsea boys have Tuesday's Beige (B Bar) and Sunday's Cuckoo Club. But there's been no new blood for awhile.

You might say that club nights have gone out of style and are a cheesy remnant of simpler (read: funner) times. Or that the emphasis on all things niche has led New Yorkers to swear allegiance to one or two venues regardless of designated nightly "theme."

But weekend club nights are thriving, with parties from the likes of Blkmarket Membership, Mister Saturday Night, TheDanger and JellyNYC reeling 'em in. The line for last Friday's Bunker bash at Public Assemble stretched almost the entire length of North 6th between Kent and Wythe. (Most Everyone's patience was rewarded as Marcel Dettmann, of Berghain fame, played a six-hour set.)

Unemployment numbers might explain why people save up their energy and cash for a weekend blowout. Then again, joblessness does give you the (hopefully short-lived) opportunity to perpetually sleep in.