The Darby Downstairs primes to open, Soho House Roof gets a revamp and rules, and a new cocktail bar is opening in Times Square!  Paz de la Huerta throws punches at the Top of the Standard, Four Loko is being sued, a Montauk landmark is up for sale and so much more. Today's nightlife roundup is feisty! -

1. Mixology As An Art Form: The Best Cocktails In The City & Where To Get Them [GofG] 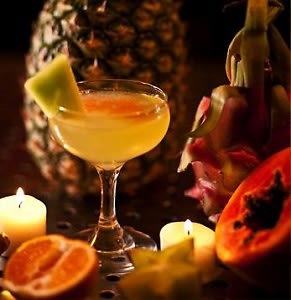 New York alcohol traditions fall in and out of style on a regular basis. We scoured the city to uncover some of the new trends, to discover that the haute cocktail scene was making a comeback. Below is a list of the best places to go for the chicest and most well-crafted libations. 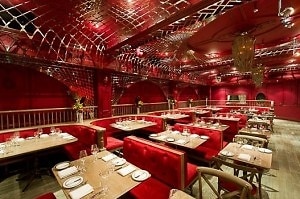 Alex Guarnaschelli, judge on the new season of Chopped All-Stars and executive chef of Butter, also leads the kitchen at The Darby. She dishes on the new supper club.

"You think you can open a restaurant because you have a lot of experience – insert sadistic smile – but we started from zero. It’s a very unusual dining experience, there’s a band that interacts, the menu is American – but it has a retro feel with a lot of throwback dishes.  We’ve been doing a lot to make the show times coincide with the dining experience; that’s very complex. And things like the lighting have been nuanced a lot. There also have been some real clunker dishes that I’ve taken off the menu. I look around and say, 'Who thought this would be good?'...There has been the usual learning curve."

She also drops some exciting news. The basement will be open for business soon.

"It’s called Darby Downstairs, and it will have a lounge menu with food. It will open in the early evening and be open all night – I’m not sure how late. That’s going to open probably by April first. It will be intimate." 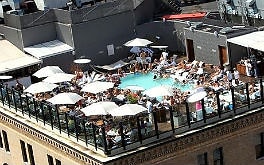 Summer is almost here which means pooling it at Soho House's coveted rooftop. The space has been renovated with a new bar, sun loungers, towels, new flooring, and removal of the gym. Other additions? Rules!

Members will only be allowed one guest before 5 PM on weekends and holidays. Normal guest rules apply during all other times. Every Sunday from 8 AM until 11:30 AM for "Sunday Family Hours", a time when the club's roof will be only available to super cool young-uns with mega trust funds, otherwise known as Child Members. Anyone not a Child Member will not be permitted. Memberships for kiddies are capped at 250 and will not be renewed automatically. 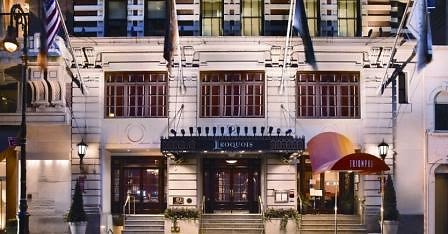 Meaghan Dorman, the head bartender at the Raines Law Room in Chelsea, has been hired to oversee the creation of a new, 25-seat cocktail bar and lounge called the Lantern's Keep in the Iroquois New York hotel on West 44th Street. The space currently houses a private dining room for the restaurant Triomphe-which will remain open. Meagan describes what to expect:

"While there won’t be much change to the décor of the room, which she said has the feel of “a French salon,” with blue velvet and marble. The cocktail selection and service will be put together pretty much from scratch. There will be new glassware. There will be ice from the Okamoto studio in Queens, which supplies many of the most cocktail-serious bars and restaurants around town. She has carte blanche, she said, to decide on the spirits to be stocked. She’ll write the opening cocktail menu."

Is Times Square getting cool again? Will they let the hookers come back? 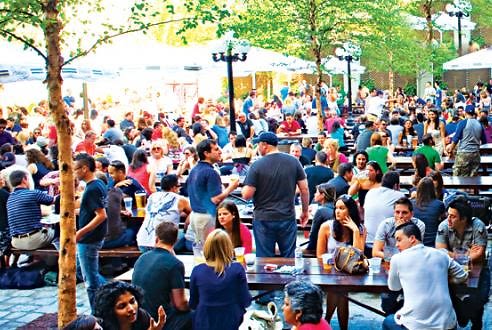 It's raining, it's supposed to snow, and it's hard to believe but Spring is just around the corner. Really, I promise. Where will you be headed once the weather clears up? Time Out New York has a list of the best bars for sunshine.

6. The Shop Brooklyn: A Motorcycle Bar Inside A Garage [NYP] 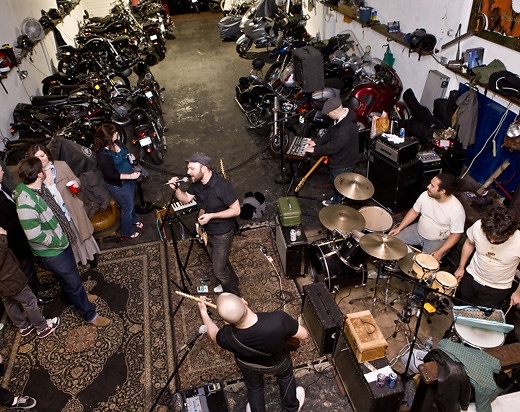 Graffitti, bikes, Curtis Mayfield on the jukebox and 'hipster ambiance,' The Shop Brooklyn is the newest place to hang.  Dan Lyle and co-owner Stephen Caison discuss why they chose to have a bar inside a garage.

“We just started doing it for people who were hanging here on the weekend, messing around with their bikes,” Lyle says of the barbecue pork ribs and other dishes they made, such as cole slaw and beans. Then they started thinking bigger: “We realized we had a good location, a good group of people, and we said, ‘Let’s create a little bar-cafe for them to congregate.’” Using their old Sears Craftsman tools, last year they built that bar-cafe — with a lounge area above it — at the front of the garage, and served coffee by day from a La Spaziale while they waited on a beer-and-wine license. That came in January."

7. Paz de la Huerta & Samantha Swetra Get In A Cat Fight At The Standard [Gatecrasher] [Image Via] 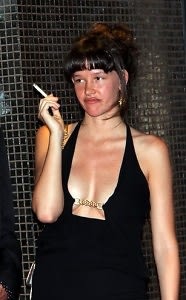 Uh oh.  Samantha Swetra and Lindsay "Totally Sober" Lohan were hanging out at the Top of the Standard over the weekend when Paz de la Huerta approached and started flirting with one of their male friends.

"De la Huerta suddenly lost her footing and went crashing into an adjacent table. After taking in the unexpected pratfall - which, our source adds, resulted in one of de la Huerta's breasts "hanging out of her dress"- an amused Swetra yelled out "triple axel!" The gibe sent de la Huerta into a rage and she threw a drink glass at Swetra's leg and took a swing at the model's face, the source says."

Sam got hit in the lips and nose and was bleeding from shattered glass, "Lindsay was pulling shards of glass off of it." Paz was escorted out. Though it's not confirmed chances are high her boob was still sticking out.  Samantha is pressing charges. 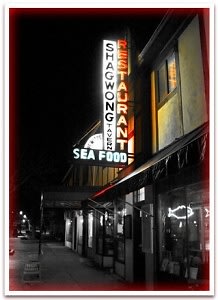 A landmark is up for sale: Jimmy Hewitt's Shagwong Restaurant & Bar has been put on the market for $6.5 million. Built in 1927, the hot spot attracted the Rolling Stones, Elizabeth Taylor, John Lennon, Yoko Ono to name a few. 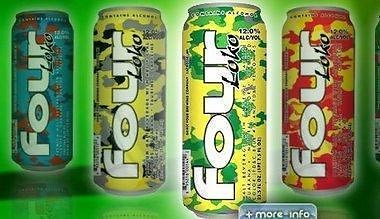 A New Jersey Man is suing Four Loko after he drank two and a half cans, fell asleep, woke up with his heart racing, realized he was a fucking moron for drinking liquid danger, and had to be rushed to the hospital.

"A complaint filed last week against Phusion Projects, the manufacturer, claims the fruity beverage caused permanent heart damage in Michael Mustica, 22, a tire salesman from Knowlton Township in Warren County."He was a victim of people who tried to make money off a product without worrying about the health consequences," said Andrew D’Arcy, an attorney for Mustica." 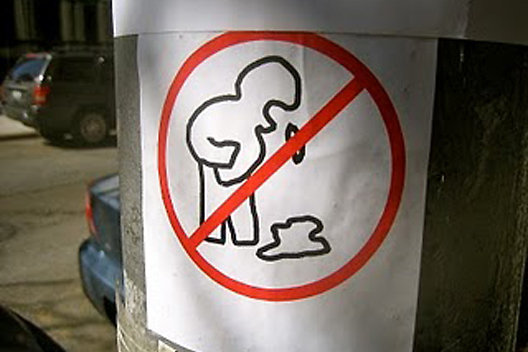 Spotted near McSorley's. This is always good advice. 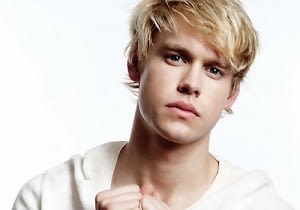 He left early and "joked with doorman James Savage on the way out that he had to wake up early to meet "Lea Michele and William Baldwin for church the next morning." But his holy act didn't last long. The doorman advised him not to leave so soon since DJ Victor Calderone was about to go on the decks. So Chord returned an hour later for Calderone's set and stayed for two more hours."

Groupon is ready to go public with the incomprehensible estimated value of $25 billion. So far the company has been a huge success, but Slate wonders if it can last:

"The logic is simple: Merchants are encouraged to use the deals to attract new customers, who in theory will return at full price. But, in what seems to be an increasing number of cases, customers come for the deals and then leave for deals offered by other merchants through Groupon. So the number of "new" customers attracted by cheap prices increases, and the number of loyal customers decreases as shoppers prefer to become "new" again for whomever offers the best deal."

13. The Explorers Club Pays Hommage To The Apocalypse At Waldorf Astoria [NY Observer]

The theme at the Explorers Club 107th annual dinner held at the Waldorf Astoria was “Exploring 2012: The Maya Prophecy.” Men and women dressed as ancient shamans, complete with feathers, face paint and a  shadowy sense of foreboding doom.

Reactions on the theme were mixed:

"Stella Schnabel was a bit dubious about the 2012 eschatology. “I do think it’s very interesting, it’s something to look into, but I don’t believe in it,” Ms. Schnabel said. “It’s a good theme, because it’s a festive one.” The apocalypse? Really? She considered, then grew more sober. “The apocalypse is happening in Japan right now,” she noted.