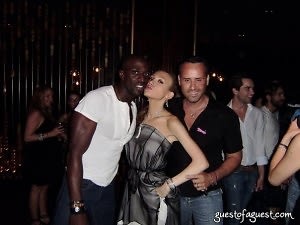 Go HERE for more photos and TAG YOURSELF in the Gallery!

Let us catch our breath before we begin. Ok, ready, here we go.

Next on our agenda was The Pink Agenda at the Royalton. We ran in kissed the hostesses, the lovely Rachelle Hruska and Devorah Rose and chatted with Tia Walker, Douglas Marshall, Stephanie Wei, Keith Lissner, Mary Rambin, Jered Clark, Morton Davidson, Michael Barclay, Chance Yeh and Yann Vasnier. We must say it was the warmest hotel lobby we have ever been in, and the raging fire in the fire place-in July-was little help. After a few minutes trying to get that damn pink ribbon on our shirts, we gave up, and hit the door.

Our next stop was the Blackbook Magazine launch party. Our photographer, Nelson Simoneau, has a big fashion spread this month, so we were excited to see the final results. At Socialista a doorman was telling everyone who was standing outside to come back in a half hour due to capacity issues. We weren't having it, we had a schedule and we were sticking to it. We grabbed one of the cuties with a clipboard and within minutes were whisked in. Once inside, we picked up the issue, loved it, congratulated Bryan Erickson and Bryan Levandowski (CD and AD of Blackbook) and grabbed a margarita! We hung with Ted Cleary and Emma Snowdon-Jones and met one of our dates for the evening Chantal Adair. Once she arrived we jetted to the Vans/Marisa Miller party.

Marisa Miller designed a collection for Vans footwear and this was the launch. The party, at the Maritime Cabanas, was the New York swan song for our baby girl Stephanie Shaw. Stephanie is heading to work with the LA branch of Full Picture PR. We are sad to see her go, but know we will be seeing her again soon.

Once we got inside, we met our second date, Diana Papanova and spied what looked to be very good gift bags. Since we are sick of not getting one as we leave, we grabbed one as we walked in! Inside the bags, was a Vans watch (Can anybody say re-gift?) and a coupon to go online and design a pair of our own Vans for free! For reasons unkown, Scott's bag also had a Victoria's Secret bikini. (He begrudgingly gave it to Chantal). Seen at the party Marissa Miller, Matt Henson (Flaunt), Robert Verdi, Dominick Pucciarello, Tara Fougner, Patrick Tully, Mike Borancati and Erma Eliazov.

As open bar closed, we all agreed on Cipriani. Once Patrick let us in, we saw the usual suspects, Adis Gutic and Anela, Karim Amutulla, Kate Secor, Carrie Baker and the always jovial Mauricio! We laughed, we cried, we drank, we danced, we left.

Our final stop was, as always, 1OAK. We have been meaning to write something about 1OAK. Oak has recently had a bit of bad press over a gay bashing in the club and the management's supposed behaviour afterwards. Since we were not there we can't comment on what happened that night. What we can say is that we have always been treated very special there. We have been guests at Scott Sartiano and Richie Akiva's table, had dinner with door girl Sherry Cosovic, went drinking with door guy Bin, and have asked many a favor from in-house promoter Adam Alpert. All of them are the furthest thing from homophobic-and we find the accusations to be highly implausible. Scott Sartriano specifically has never been anything but a gentleman and was even understanding when we introduced ourselves after already meeting him a dozen or so times! Finally, unlike other clubs in the neighborhood, they have even let us come in when we had more than three gay guys with us. That's our opinion and our experience.

After a drink or two and a twirl on the dance floor, we dragged ourselves out the door...another great night,