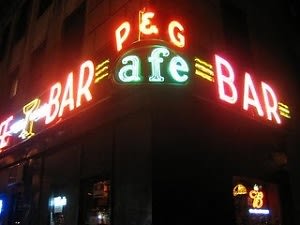 P&G Bar, an Upper West Side dive that was open for over six decades, has closed its doors for good. Trouble started in 2009, when the space was forced to remove its famed neon sign and lost the lease to 279 Amsterdam Avenue location. They moved just blocks away, but still struggling with a $500,000 debt, have been forced to close.

A notice from the New York City marshal's office is taped to the front window that states the landlord had taken possession of the property.  Owner Steve Chahalis, who took over the bar from his father Tom,  had planned a big blowout good bye party for next week, but on Wednesday night notified Facebook fans,

"I'd like to thank everyone for their support and love of the divey little bar I've called home for the last 3 decades.Unfortunately to to some ill-will recently created with the landlord, they have pushed forward our departure date.Tonight will be the last night, they are coming for my keys tomorrow morning."

Chahalis told DNAInfo he plans to declare bankruptcy and would consider opening another venue, though he may wait for the economy to bounce back.  "A lot of people are getting a bottle of wine and going home and watching TV," he said.  Who knows, maybe at some point the sign will light up again at a new location.