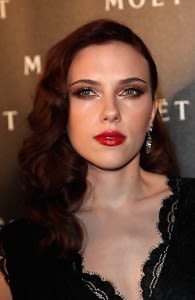 Last fall I wrote about celebrities gracing beloved East Village dump Mars Bar with their shiny, happy faces. Over the weekend bodacious crooner and sometimes-actress Scarlett Johansson dived into a game of pool at humble neighborhood holdout Lucy's. Stars, they're just like us in not getting into Le Bain. Only they choose to skip it. -

In the case of Mars Bar, Hollywood interlopers Drew Barrymore and Penn Badgley showed up to conduct a photoshoot and a Times interview. Mars Bar's graffiti, neon and decades of grime lend themselves nicely to a fashion spread. And the Bukowski-esque Mars would obviously appeal to journalist types depending on cheap booze to get them through a soap star puff piece.

Lucy's is a less heralded East Village retreat, a less self-conscious throwback to the punk glory years. Rumor has it that bathroom cleanings are not limited to presidential election cycles.

What drew Scarlett to Lucy's? The same thing that draws all proles there: a mellow, if dusty, vibe; a killer jukebox; and, of course, Lucy herself, the benevolent, bouffanted, Polish materfamilias of the local bar scene. (Lucy has been tending bar in the area since before Mars Bar even opened in 1984.) 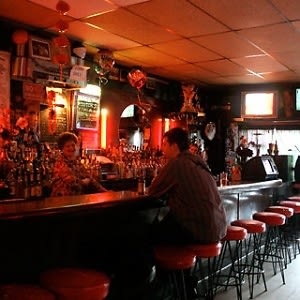 Dive bars allow the washed elites to avoid pests like the paparazzi and eyes wide with youth and clear of jaundice who might snap a not-so-discreet cellphone shot. It sets them apart from the lowly celebutantes whose livelihoods depend not on acting chops but on appearance fees at Meatpacking or Chelsea cheese festivals. And it keeps them safe from the perilous intersection of stilettos and pink waterbeds.

Traditional, glossy celebrity joints shouldn't fear an exodus. You'd think they would depend on celebrities actually showing up to generate publicity and attract the herds hoping for a glimpse. But these days, average Joes are happy to go on their nightly star searches, even if they're looking in the wrong place.