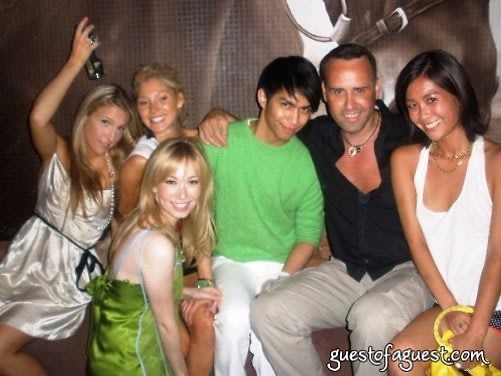 Go HERE for more photos of this event by Scott and Naeem.

Last night was a typical night for us, too many invitations combined with not enough time or energy. So we missed Blue and Cream, said no to W New York Downtown Hotel & Residences(too far!) and decided that we're only going to do events where our friends have some major involvement, not just attending. So our first stop was Jasmin Rosemberg's launch for her new (and first) book, How the Other Half Hamptons. The event was held at one of our favorite spots, 1OAK.

We walked in and after the mandatory snap by PMC's Chance Yeh, the party was on. Within a few minutes we gathered our posse and took over the middle booth overlooking everything. Our group included the author herself, looking lovely and posing for hundreds of pics, Ted Cleary, Fingerprint's Tiny Tim Garcia and galpal Jaclyn Smith, Stephanie Wei, GofG's Kerry Cassidy and Douglas Marshall, designer Keith Lissner, MTV's Ali Jacobs, Us Weekly's Ali Puliti, Armani Exchange's pr girl Andrea Burman, Tara Fougner, Model Hotel's Jesper Lannung, Betsy Rudnick, 1OAK's Adam Alpert and Shadow PR/1OAK spokesperson Lisette Sand-Freedman. Towards the end of the party our dates finally showed up, (girls what are you going to do?). First came Conde Nast's Angelique Reed along with HBO's Parris Picket, and then our baby Kashmir Snowdon-Jones along with our new friend Alexa Winner. We headed out the door and ran into door diva Sherry, who was in shock at our early exit. We promised we would be back and tried to wrangle cabs. Question? what's the point of a cab-van if you can still only get 4 people in it!!

Our next stop was for the birthday of the tallest (and sweetest) white man we know, Major League Baseball's Justin Shaffer. He held it at some little dive on the LES called bOb bar. Based on some of the stunned looks as people walked in, we weren't the only ones confused by the venue choice! But, since Justin is such a popular guy, we all roughed if for the night and once inside, we met up with more friends and a great time was had by all. We grabbed our East Hampton hostess Tara Church first and were actually able to finagle a table in the tiny spot. People there to celebrate Justin's 1 step closer to death included:

True to our word, we headed back to 1OAK for a nightcap. We winked at the handsome Bin and dashed inside. As we were walking in we met up with our boy Arthur Boujenah and his new fiance, Elite model Erin Becker. We headed over to Richie Akiva's table and had a cocktail or two. Sherri came in to see that all was well and after a little chat, we decided to call it quits. Another great night.