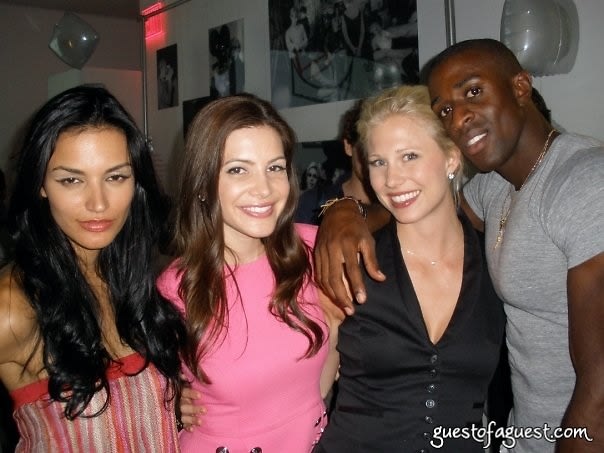 [Naeem with the ladies of NonSociety]

Go HERE for more photos from Scott and Naeem.

We started our night with dinner at Waverly Inn. We had a large group including, Sparrow, Ro Pennuliar (Allure), Eric Spear, Will Wikle, and Timo Weiland. Waverly was a scene as always and we really couldn't enjoy ourselves as we had overbooked ourselves again. After not so much as a cocktail, we air kissed the group and headed out the door and were pleasantly surprised to bump into Kipton Cronkite's on our way out.

We next went downtown to the Martini & Rossi/Interview magazine party at the New Museum. As is the case with all parties held there, the door was a nightmare and after wrangling in (Thank you Douglas Marshall!) We headed upstairs to drink Martini & Rossi on the rocks, which is surprisingly quite good.

More photos and story from Scott and Naeem below:

We noticed that the new accessory of the season is not the latest Birkin or iPhone, but your own personal camera crew, as we counted at least ten or so as we walked in. Our first camera crew belonged to Mary Rambin, Julia Allison and Megan Ash. We said our hellos and tried to make small-talk but found it a bit daunting under the lights and Scott kept bumping into one of the crew. (We think it was the boom guy.) We quickly made our way to the bar.

Despite the door drama, the room was pleasantly under-crowded. We saw Mena Suvari across the room in a great little black dress and a dramatic up-do. We applaud the fact that she actually stayed for the entire party instead of running in and running out, and mingled with the crowd, instead of being roped off somewhere like an exhibit.

With drink in hand, we mixed and mingled with Susan Kilkenny (Interview), David X. Pruting, Chau Ngo, Emma Snowdon-Jones, Liam McMullan, Sergio Kurhajec, Stephanie Wei and Loris Doran. Loris was excited to tell us about his new flagship store that he will be opening next to John Varvatos in the fall.

We said our goodbyes, missed the giftbag (drat!) and headed over to do our hosting gig at Angels and Kings. The party is once a month and each month it gets better and better. Our co-hosts include Peter Davis, Alan Rish, Mark Warfel, Chuck Attix and Sam Bolton. The gorgeous DJ Angelos Styliano pumped the crowd with his eclectic mix and Trump vodka kept us going.

We held court at our table which included Charles Lorum, Michael Musto, Nicholas James Brown (Esquire), Carrie Baker (David Yurman), Jessica Bamberger, Jacqueline Adriano, Brett Coady, Alan Rish, Kristian Laliberte, Juliano De Rossi, Eric Ray Davidson, Will Wikle and we're sure many more that we can't quite remember. Matt Levine showed up to give us some love and then a bunch of us had enough and headed out the door.

We stopped at our home away from home 1OAK, did a little dance, made a little love, got down last night. another great night....