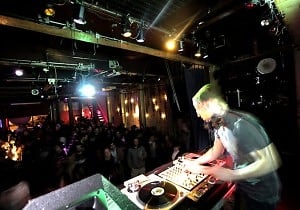 Fans of the monthly Bunker party at Public Assembly will get a chance to catch the forward-thinking electronic party and its curators, Bryan Kasenic (aka Spinoza) and Seze Devres, tonight at a venue that is as unexpected as it is deserved: Lincoln Center.

Festivities begin at 9pm and end at midnight, which is around the time the Bunker faithful typically leave their apartments and make way to the beloved First Fridays shindig. Don't despair: you'll be sure to get your late night and early morning fixes elsewhere. Don't complain: it's free. There will also be sandwiches from Tom Colicchio.

The event is part of LCDJ, a new Lincoln Center DJ showcase held in the David Rubenstein Atrium. As the participants note, "For the first time ever, Bryan and Seze will simply present ourselves instead of hosting other artists."

Tonight is a meeting of uptown and downtown, which today so often means Brooklyn. Bunker, my pick as the most consistently killer party in New York, injects some youthful cool into occasionally staid Lincoln Center, which has a special place in my heart thanks to its Film Society, New York Film Festival and, yes, Breakfast Club reunions. It's a marriage of visuals (courtesy of Seze) and music (from Spinoza), a melding of the stuffy mainstream with the scruffy, Berlin-esque alternative underground. 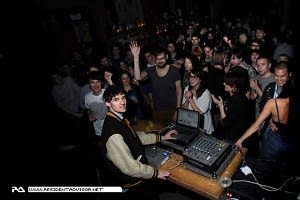 Bunker might be a fish out of water uptown. But it's Lincoln Center that seems interested in testing the water, if not jumping the pond (or East River). Bunker at Lincoln Center is the sort of unlikely collaboration that makes New York New York and the kind of dynamic happening that I've enjoyed writing about the most here on Guest of a Guest. Thanks for reading!