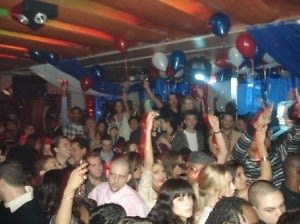 It's not getting the breathless Fashion Week coverage of semi-newcomer Don Hill's. But Meatpacking District nightclub Tenjune hasn't fallen out of the press just because it's fallen from its perch atop the world of exclusive nightlife. Its latest big splash: a woman whose head was split open after a fellow patron attacked her with a stiletto.

Laurie Nagle, 31, claims that on August 8th Vera Gjokaj launched at her noggin with a high-heeled shoe after...well, there doesn't seem to have been any provocation. The attack stunned nearby clubbers and sent Nagle to the emergency room for 2.5 hours and 40 stitches. Gjokaj was later arrested for assault.

Nagle is taking her case to court in the latest setback for Tenjune. On August 23rd, the 17-year old Nicole John fell 22 stories to her death after paying the club an underage visit. Tenjune refused to comment to the Post regarding Nagle's accusations.

The most damning of Nagle's allegations involve the club's staff. She claims a bouncer warned her to steer clear of the would-be attacker, saying she was "going to be trouble" and that security forced her to stay inside the club after the attack, delaying proper medical attention. Kinda makes you long for the days of Twilo, which at least had the decency to have a private ambulance on call to ferry overdosing revelers to the nearest hospital. Or so some claimed.

Following a bizarre attack at a Midtown club last year in which one guest lost part of his ear, this story makes clear that at certain venues, the bloodsport revolves not around getting past the door, but emerging from it in one piece.