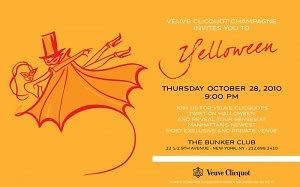 What's going on with the new club, the Bunker, owned by "Beatrice Inn" alum Matt Abramcyk? No seriously. I mean not that I'm the official on what happens after midnight, but I remember hearing about this club for a split second during fashion week....

...and, up until last night (it was the location of the after party to the Whitney Studio Gala), it was off my radar. Come to think of it, all of these "5 New Clubs to Look Foward To" were.

It should be noted right now that I have yet to step foot inside the Bunker (though I'm hoping to change that at Veuve Clicquot's "Yelloween" party tomorrow night- left). I've heard from a couple of GofG'ers that it's actually a pretty cool space...you walk down steps in an entrance on 9th avenue, close to Dos Caminos. The only problem? It's located smack dab in meatpacking (24 9th Ave). It has a huge dance floor in the middle and is BIG (4,000 sq feet to be exact).

"It's one of THOSE." Says the NYDN's Carson Griffith to me over Gchat. "Those" meaning a club that isn't yet officially opened but is doing parties to drive up the buzz. Which is actually smart.

Can a guy that was part of the success of a place like The Beatrice Inn bring the hip back to this area? Matt Abramcyk, the owner, and Bea alum is certainly going to try. And, despite the lull in activity (last night's after party for the Whitney was virtually the first time I have heard "the Bunker" used in conversation post fashion week), we are going to let him take his time...

[Opening Alert: Hunkering Down In The Bunker Below]