The pop-up party has reached its apex with a trend piece in today's New York Times.  Simonez Wolf's Madame Wong's throwdowns at Jobee have been a favorite of fashion and nightlife types since March, springing up on random nights and becoming more regular, only briefly being shuttered by cops.   The writer Alexis Swerdloff posits that the club has been popular because the space is nontraditional and unexpected, and while this might add to the appeal, there are two far more powerful reasons.

With nightclubs facing a citywide crackdown stemming from community complaints over issues like noise, party promoters have had to be a little creative. Instead of booking the same venues (one can go to the Boom Boom Room only so many times a week before it seems tired), they are putting up velvet ropes and plugging in turntables in unexpected places.

But it's much more simple than that. The reasons Madame Wong's is so hot:

1) Secrecy: The parties are, in a way, secret. There is no web site, no phone number, DJ's can't promote, it has only a bare bones Yelp page, no mention on New York mag, and very little press in gossip columns. We here at GofG have talked about it, naturally, but for the most part news of the party has been passed along through word of mouth, giving it the sort of organic  steam venues are always trying to generate. I first found out from a friend who lives in Chinatown and happened to walk by and being shocked that such a bug crowd was loitering outside of Jobee, decided to investigate.

Human nature doesn't change as you get older. It's like high school-if something is a secret, not only do we desperately want to know about it, but feel extra cool when we do.

2) Exclusivity. Pop-ups, because of their secret nature, are more exclusive and as New York club owners have know for years: the tougher the door, the more people want to make it inside. Bungalow 8 and Beatrice Inn knew this, as do current hotspots Boom Boom Room and Mr. H. It taps into those other biological needs we all have: wanting what we can't have and the overarching sense of reward/specialness when we receive what others, right there in front of us looking sad faced or angry at the doorman, can not.

These things apply to all pop-ups whether they are held at Brooklyn laundromats or China Chalet. 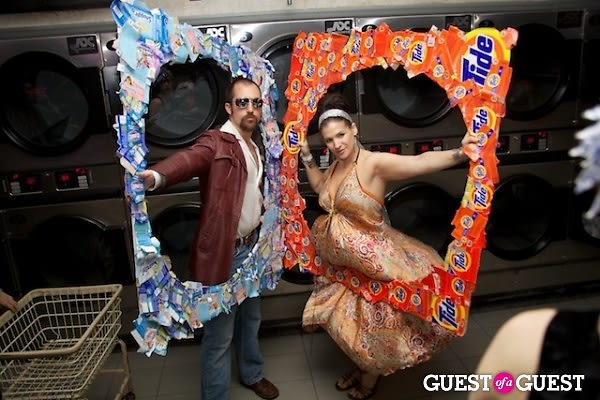 Swerdloff is right about one thing: the more unpolished the space, the better. It gives these parties a certain vibe, hits the romanticized notion many of us had about what New York nightlife would be like: gritty and uninhibited. No bottle service or sparklers, just drinking and dancing and falling in love and falling out of love and loosing yourself all in the time span of an evening.

The rawness makes you feel like you and a bunch of friends you made that night are just hanging out at someone's apartment. It's hard to find or feel any of these things at the more upscale clubs, as if all of it slides off the liquid-like surface and the glossy sheen of the leather banquettes, overly designed interior and pristine outfitted staff (wearing uniforms created by (insert designer name)).

The only down side of the pop-up is that it is only a pop-up. A temporary thing that could end at any moment, or with a New York Times article. It could push the club over the edge and out of the space, but that seems like somethign Simonez is well aware of:

"He keeps a running log of potential venues and has been half-jokingly eyeing the rotating bar atop the Marriott Marquis in Times Square. “It’s sort of my dream to do a party there,” he said. “Wouldn’t that be cool?”