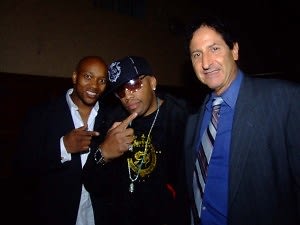 Last Thursday was quite the evening. After venturing to David Foote’s fabulous art opening, I did a complete 180 and went to The Plumm on 14th street for Frank Lucas, Jr.’s single release party. Frank Lucas Jr. happens to be the son of the “American Gangster” (of Denzel Washington fame), Frank Lucas Sr. The venue was packed by 9:00 PM, and all heads were turned when Frank Lucas (wheelchair and entourage in tow) was escorted into a VIP section after stepping out of his classic 1940’s Cadillac limo. Frank Jr. and his backing singers entertained the audience with his two hit singles “Street Star” and “Let’s Go,” which have been getting constant play on Hot 97. Guests threw back Patron and Grey Goose cocktails as they danced and Harlem-shaked their night away. Also in attendance were VIPs such as “American Boy” singer Estelle, Victoria Asher, D-Wodds of Danity Kane and fellow rapper Mr. Ozwald.

What makes Frank Lucas Jr. stand out as a rapper is definitely his message. Despite his father’s role as the original Harlem gangster, the famed Lucas Jr. is traveling on a national tour with his son while simultaneously going to schools across the country to speak on behalf of their campaign, “Grades Not Guns.” The message is just one in a string of positive messages Frank Lucas Jr. has been promoting since bursting onto the rap scene. He, along with his father, will also be facilitating gun turn-ins at inner-city schools and giving lectures on the importance of doing well in school. His attempt to separate himself from the violence that follows the rap scene and his family history has been met with open arms, making Lucas Jr. one of the most sought after new talents on the scene. Frank Lucas Sr., meanwhile, is developing a Sopranos-style show based on his adventures as the “Godfather of Harlem.”

I had a chance to speak with both father and son, and they were not only very friendly, but also extremely interesting. I found that behind the hype and glamour, Frank Lucas Jr. is extremely down to earth, extending himself as an advocate against violence, a great rap artist, and fantastic father. Overall, it was quite an exciting night, plus I got a kiss from the American Gangster…how many people can say that?!