With winter temperatures hitting, it's about that time for smokers to start picking out the new pairs of gloves they are going to need to buy to endure those long nights out and their routine nicotine fixes. Oh, who are we kidding? There's enough places in this town for you to lite up without catching frostbite. In case you need help finding one, we put together this Smoker's Guide To Manhattan Friendly Nightspots below...

Southside- Arguably the leader in the anti-smoking ban rebellion, Anthony Martignetti's preppy rec room lets customers relive the halcyon days when sneaking a smoke in the woods was grounds for expulsion from Deerfield. Lighting up here might not be quite so illicit, but the thrill is still there. (See photos below).

Circa Tabac- Thanks to its innovative ventilation system, Circa Tabac might be the last public bar in Manhattan where cigarette smoking is entirely legally throughout. People write odes to it.

Karma- Of all the interchangeable hookah bars that clog the East Village, Karma is the only one that encourages pure, manly cigarettes to compete with the gnarly aromas those ridiculous pipes usually emit. Smoking from a hookah always reminded me of sucking in tobacco that had been doused with cheap perfume (and that always led to a headache) but at least that pungency obscures the one coming from your Camel Lights.

The Delancey- Perennial birthday party destination The Delancey has a spacious greenhouse of a second floor, heated in winter, that welcomes smokers year-round. There's also a koi pond to restore some feng shui to those esp 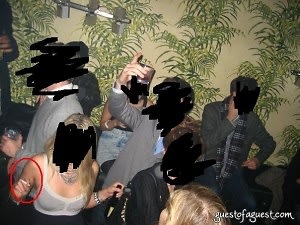 ecially militant in their dislike of cancer sticks.

Lit- I never know what to make of Lit. It bills itself as a scuzzy punk bar, yet has a velvet rope guarded by seriously loathsome bouncers. Graffiti in its bathrooms implores visitors to take "bumps and dumps," yet the venue hosts glam supermodels during fashion week parties. (Hmm, maybe that one actually does make sense.) But one thing is for certain, Lit's basement, aside from resembling Buffalo Bill's torture chamber in The Silence of the Lambs, is one of the smoke-friendliest places in town. They even burn incense (maybe Lit's biggest affront to punk rock) to mute that tobacco funk (as if Lit smells any better to begin with).

Boom Boom Room- Proving that even the beautiful people crave the occasional nicotine fix, Boom Boom Room has a lovely heated deck with panoramic city views to inspire celebrities and hangers-on to indulge their favorite vice. It's brilliant.

blessed with The Eldridge's coveted (not really) membership cards. What better way to keep off the pounds and squeeze into those snug Pencey gowns than to tear through cigarettes, the funnest weight loss supplement around?

Soho House - Pool halls might top the list of establishments that should be exempt from the smoking ban; entering one of them always adds a layer of grit to a patron, no matter how upstanding a citizen he is.  Soho House might not evoke the rough and tumble allure of the city's cue ball joints, but it does have a snug billiards room where the club's Euro-flavored membership can puff away.

1Oak- This club that was set on "changing the face of nightlife in New York" pretty much kept true to its promise. Besides celebs, yankees, and socialites flocking to party there, smokers can feel at home in the cancer room, a small (and warm) back room behind the booth to the left of the DJ booth.

Some people panicked when ex-smoker Mike Bloomberg banned smoking in NYC bars, lounges and clubs in 2003. Would noise from smokers forced outside piss off already thin-skinned neighbors? Would revenues drop as people who smoked like chimneys and drank like fish consoled themselves at home with bathtub gin to defray their ever-pricier packs? Would ash tray manufactures go out of business?

With the "smoke em if you got em" attitude of these hot spots above, we don't see that happening anytime soon.