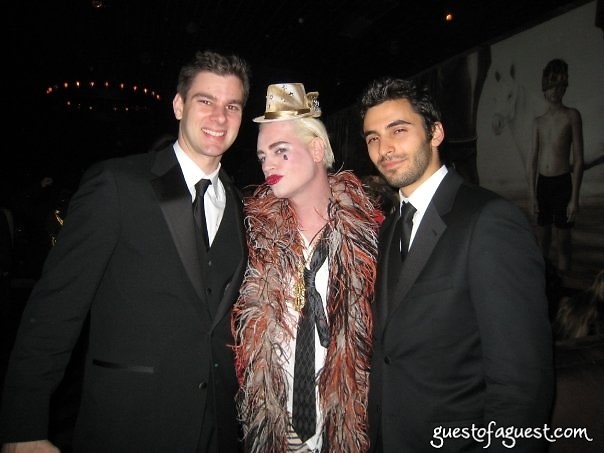 Go HERE for more photos of Tim and Jason's adventure.

Yesterday, we introduced you to Tim Morehouse and Jason Rogers, the cute Olympic silver medal fencers that are putting down their sabres to get to know the NYC social set for a bit.  They ended their night at 1Oak with Richie Rich (we must have JUST missed them!), but they put out a decent effort prior to that.  They started their night at the Italian clothing store, Eredi Pisaco store on Madison and were the guests of Edward Johnston-Balodis, (Ph.D) and Elena Chernousova who they had meet at the Sak's "Key to the Cure" event.  Jason, being Italian, apparently made a good impression there because they were given gift bags with cashmere sweaters, shirts and ties.  Next stop: Davidoff's.

The boys hit up Davidoff's at just the right time.  People from the high end barber shop "Spiff's" were there to give Tim a much needed pampering (shave and manicure), to start off his night right, while Jason was left talking up the store owner.  Next stop: The Time Warner Building for the Young Patrons of the Lincoln Center masquerade ball.

At the event, in the Allen room, Tim and Jason did a walk down the red carpet in their masks before hobnobing with gossip girl's Nicole Fiscella and Amanda. There was a bar on every floor (one was a new citrus vodka, one a rum bar, and one all champagne).  They watched as Uma Thurman presented an award to designer Zac Posen.  Afterwards they shared a conversation with Zac who was familiar with fencing from his alma mater St. Anne's.  On to 1Oak before finally calling it a night!

We look forward to hearing more from Tim and Jason as they document their adventures around Manhattan, and seeing Jason in his Wolverine costume!