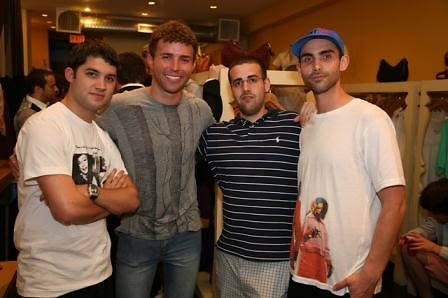 Click HERE for more photos of this event by Gradient's Matt Fried.

In case you haven't caught on, Harlem is in fashion this season. From the Home Base project, to Leroy Neiman's Art Center opening, to the creme de la creme of the "Supper Club" hosting dinners, everyone seems to be heading north. Which is why, when we heard that the trend setters over at Unruly Heir were hosting at party up at N Harlem, we weren't surprised.

In addition to reveling at Unruly Heir's latest installation of seerksucker hoodies, fitted plaid blazers, Nantucket red shorts, and slim khaki pants, the party ramped up when the adorable BET-award winning Jesse Boykins III took to the microphone and created his own stage amidst the in-store audience.

Jauntily clad in all Unruly Heir gear, Jesse worked the crowd into a energetic frenzy with a jazzy and soulful sound reminiscent of early original R&B acts, but with production and writing that is undeniably relevant today.

Following the show, each guest left with a copy of Frequency 1 of Gradient Magazine, a new complimentary magazine that chronicles new and avant-garde fashion, arts, furniture, architecture, and people. In addition, guests that spent over $100.00 left with a free Unruly Heir tshirt and bowtie.

Guests took their SVEDKA Cosmos outside to the lush terrace--causing an impromptu garden party in Harlem!