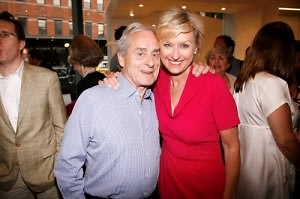 At last night's ultra-swanky Norman Mailer Center and Writers Colony gala at Cipriani, we caught up with Tina Brown, a lightning rod of late for her quixotic vision of a Newsweek-Daily Beast hybrid. Find out why the lofty goal fell flat from on high...

Tina Brown stood casually in the foyer, talking with Time magazine political scribe Joe Klein (and author of Primary Colors)--and using the notoriously barbate journalist as a barrier from the barrage of questions coming her way about the curdled deal, I jumped into the fray to join the discussion:

"You can do this interview without me," Klein insisted, giving Brown a sideways hug.

"Oh, Joe, you stay; you do it for me." The chummy two developed a close rapport when Klein worked as a New Yorker writer during Brown's time at the helm.

We asked what she foresaw in her attempt to acquire Newsweek, and she let it slip that it would be an extension of her on-line baby after all.

"Oh, God," she said. "I mean listen, that is like you know…what did I envision? I'm envisioning 'The Daily Beast.'"

Then Klein cut in and provided the requisite feather-fluffing:

Tina demurred blushingly, and in a jocular coaxing goaded him: "Go on..."

Klein lamented that Brown's intentions went south for the newsy hebdomadaire, because he considered a juiced-up Newsweek an opportunity for Time to up the ante.

"I think that for 'Time' to be excellent,  we have to have really strong competition," he said.  "And so I'm disappointed."

But Brown optimistically now-now-ed him.

"Newsweek' can be really excellent with a different team," she said.

Klein wouldn't let his point rest and started to insist Brown would be the right fit. 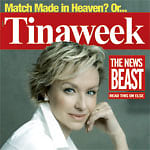 "All I said about you…" he began, but Brown stood her ground and clued us into the intricacies of why the deal curdled.

"C'mon…," she said. "It wasn’t the right fit for The Daily Beast, and I, and Newsweek. And that's the thing, I mean, it was an opportunity for our business before, but then we looked at it closely and it seemed that it was too hard to do in a way that we thought was right."

Did she mean that Newsweek was a fossil and that her tech-forward vision couldn't mesh with anachroism?

"No, no it's not that at all," she said. "It's just that we have to be nimble, you know, our business, and when you started to graft the things together, it was clear that it wasn't going to be a nimble business for us, and that might even be the reverse of helpful for the brand. It was too hard to meld those two things."

The confluence of old-guard-dinosaury print and on-line new news may not have been there, but at least Klein provided a nice ego boost during this rocky time.