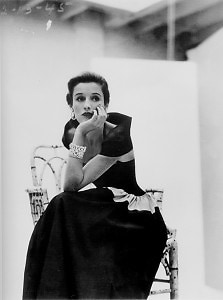 Born: July 5, 1915 Died: July 6, 1978 (age 63) Husbands: 2; Stanley Grafton Mortimer Jr., and William S. Paley Who she is: With a name like Barbara "Babe" Cushing Mortimer Paley, it's not surprising that Babe was one of America's most buzzed about socialites of her day. The daughter of a world-renowned brain surgeon, Babe and her sisters all married into wealthy families. Babe's social career officially began at her debutante ball in 1934, at which President Roosevelt's sons were guests. Babe worked briefly as a fashion editor at Vogue, and she was known throughout her life as a fashion icon. She was named to Time Magazine's best dressed list multiple times, and was named to the International Best Dressed List Hall of Fame in 1958. [Photo via]
1 of 6