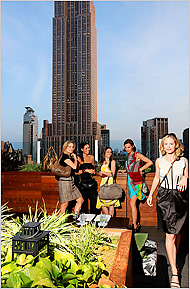 Rooftop bars are where it's at, and Frank Bruni seems to think so too. In his article for the Times, he reviews some of Manhattan's choice locales, including  the Roosevelt and Gramercy Park Hotels. Apparently, the latter has some nice foliage (uh... ok), and the Strand Hotel's new bar has an unbeatable view of the Empire State Building.

He lays out the deal, from when and where to go, to how to act, for some of us newbies. You, too, can "hover in the clouds!" (at the Peninsula), a la Bruni. Oh, Holden Caulfield Frank, you're so poetic.