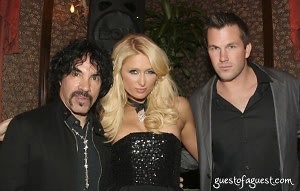 On an interview with  Heat Magazine Paris Hilton made it clear that wearing clothes twice is a no-no for a Hilton heiress.  A leather jacket or really cool pair of jeans make it to the top of her list as okay to wear twice if you really have to ( but please note, the jeans have to be super cool).

The 29 year old socialite said that after wearing clothes once she gives them away.  So where can we sign up for the gently used clothes of Paris Hilton?  Unfortunately in order to squeeze into her practically new wardrobe you have to be part of the ittty bitty titty committee.  Paris continued to tell the magazine that it's unfortunate that not all her friends are lacking (oops, we mean, gifted) in having small breasts.

"I'm quite lucky I have small breasts and that means I can wear most clothes. Some of my friends have bigger breasts but I can wear pretty much what I like. It's a real shame though because it means I can't pass my clothes on to them, because they'll be too small around the bust."

At least she's proud of what her momma gave her, but none the less, wearing clothes once or not at all and then giving them away is a bit much (unless you're the one receiving her discarded clothing).  Paris Hilton also admitted that she has way too many clothes in her closets (yes closets as in plural) that still have the tags on them!

"I still have so many clothes in my closets that still have the labels on. I see them so often I think I've worn them but then I realise I haven't. So I either give them to my friends or donate them to a charity so they can auction them off."

I bet the charity that receives Paris' discarded clothes has the best dressed under privileged people in the world!  Maybe we should find out where those clothes are being distributed to and wait in line for some free Chanel, Valentino, and Dior labels (I mean, I'm not too sure about it though, they were worn ONCE after all.... they might be too worn out)!